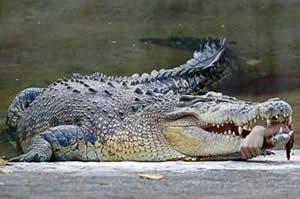 A vet's torn arm in the jaws of a crocodile at a zoo in southern Taiwan. Photo: AFP

Taiwan -- Police in Taiwan were forced to shoot a crocodile after it bit off the arm of the zoo veterinarian treating it, an official said on Wednesday.

Dramatic television footage showed a police officer firing on the animal to wrest the severed limb from its jaws.

Chang Po-yu, 38, from the southern Kaohsiung city's Shou Shan Zoo, was injecting the sick crocodile with anaesthetic when it attacked him.

He was said to be in a stable condition after being rushed to hospital for an emergency operation to re-attach his arm, an local official said, although it was not immediately clear whether Chang would recover.