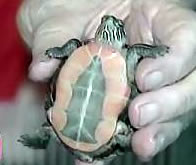 CHICAGO, Illinois -- She has appeared on a grilled cheese. Then, a highway underpass.

Now, behold, the Virgin Mary has descended upon the belly of a Burbank pet turtle.

In a shallow plastic tank on Lotus Drive, the chocolate brown vision beams from the pink gut of a sand turtle named Mary.

Sitting beneath a gold-speckled paper plate featuring a coloring book version of Jesus' mom, Shirley McVane dangled the turtle from her plump fingers.

"She came to a holy house," said the 81-year-old. "I think she came to visit us so God knows she's happy and safe."

About a year ago, McVane's grandson bought little Mary and her tank-mate Joseph (they were named after the silhouette appeared) from a local pet store.

The turtles were just babies then, smaller than a quarter. But as they grew, the image on Mary's belly began to take shape.

"I thought we were going crazy the first time I saw it," said Dolly Fordyce, 58, McVane's daughter. "I looked at it and said, 'It can't be.' But then I looked again. I mean, you can't deny it."

A member of St. Nicholas of Tolentine on the Southwest Side for nearly 50 years before moving to Burbank, McVane has splashed her walls with rosaries, prayer cards and paintings of the Last Supper.

When she moved in to her new home three years ago, she had her priest come to bless it. And he also blessed her dog, Precious; her bunny, Peter; and the array of kids, grandkids and great-grandkids who live in the modest ranch home.

McVane shouldn't be expecting a visit from her priest to bless her turtle, though. The Archdiocese of Chicago doesn't typically send out investigators to debunk or authenticate such sightings, spokeswoman Dianne Dunagan said.

"If something like that causes people to think about God and pray, that's a good thing," Dunagan said. "Time usually takes care of these things. If it gets to the point where people are flocking to this thing, the church will call in experts. If people forget about it, it may just fade away."

McVane doesn't really care whether anyone believes her. She just knows that the Virgin Mother has visited, for the second time.

Just after McVane's husband of 49 years died in 1994, McVane was struggling with her grief. One night, she said, Mary appeared in a vision and told her everything would be all right. The visit helped her soldier through those tough years after his death.

McVane said she mostly thinks the turtle's markings are fun. But she still may bring her priest over to take a look.

"Maybe he can bless her," Fordyce said excitedly.

"Maybe she can bless him."