Bonefish Spawning Locale Discovered -- They Do It Offshore, In The Dark, At High Tide 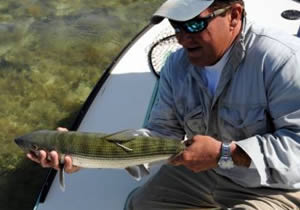 VIRGINIA KEY, Florida -- If you're looking for bonefish from Miami down to the Marquesas Islands, you have about 321,000 to choose from, and that is down slightly from the average of previous censuses—mostly due to increased participation among those who are counting, researchers speculate. The University of Miami's Rosenstiel School of Marine and Atmospheric Science held the sixth annual Florida Keys bonefish census, in conjunction with the conservation group Bonefish & Tarpon Unlimited (BTU), which involved 64 professional fishing guides, scientists and graduate students split up among 19 zones, covering 1,575 square miles.

"It's true the numbers are down slightly," said Dr. Jerry Ault, Rosenstiel School professor of marine biology and fisheries and co-founder of the census along with Sandy Moret of BTU, "However, I wouldn't read too much into that change. Statistically there is no significant difference year over year. The decrease could be due to variations in where the bonefish showed up this year, the weather on census day, or the fact that we had more guides scouring the Lower Keys than in previous years. A Spring 2008 census to calibrate the Fall census showed pretty much the same thing --we're getting a generally consistent count from year to year, which helps to validate our research process and confirm our estimates."

Ault and BTU started the annual census in 2003 to determine a baseline for scientifically evaluating changes in the Florida Keys bonefish population. With help from flats guides and their customers to poll the flats looking for bonefish, they counted the quantities of bonefish observed and caught. This year, the boats set out on October 29, to visually and methodically count bonefish throughout the day. The volunteers, who ranged from fisherman to scientists and graduate students, covered well-known, popular bonefish territory, which ultimately resulted in a population estimate this year of 320,961 bonefish (+/- 41,091 for a 12.8 percent coefficient of variation) or about 204 bonefish per square mile.

Bonefish are valuable for several reasons. Because of their large size, bonefish obviously rely on smaller creatures in the ecosystem whose populations aren't as easy to assess. Bonefish are fairly easy to count on the flats and can be seen as an indicator of the overall ecosystem's general health—researchers will observe changes here much sooner than within a smaller creature whose numbers are in the millions. Long-time bonefish anglers often remark on the dramatic decreases they've observed in this popular sportfish's population.

"This estimate of the 'visible' population makes each bonefish in the water worth about $3,500 per year to the industry, and about $75,000 per fish over its lifetime," Ault said.