WWF: Toxic Boat Paint Harming Wildlife; 'A Scandal the World Should be Ashamed Of' 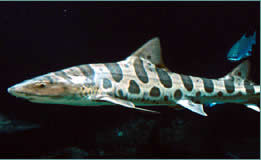 The church founded by the Rev. Sun Myung Moon will pay $500,000 to restore damaged habitat

SAN FRANCISCO, California -- United States Attorney Kevin V. Ryan announced that $1.5 million has been designated for rehabilitating and restoring marine wildlife habitat in the San Francisco Bay to further protect the California leopard shark. $910,000 of the funds have been assembled from payments by a San Leandro church, and restitution by the church’s pastor and five other criminal defendants who were involved with an operation that poached thousands of California leopard sharks from the San Francisco Bay for more than ten years. The Holy Spirit Association for the Unification of World Christianity (HSA-UWC), which includes the Bay Area Family Church in San Leandro, has agreed to pay $500,000 for the wildlife restoration partnership. In addition, $300,000 from the California Coastal Conservancy and $300,000 through the combined contributions of the David and Lucile Packard Foundation, the William and Flora Hewlett Foundation, and the Gordon and Betty Moore Foundation were today designated for the same purpose.

The HSA-UWC, founded by the Reverend Sun Myung Moon, will contribute the $500,000 as part of a non-prosecution agreement with the United States Attorney’s Office. Six individuals have now been convicted and sentenced for knowingly catching thousands of undersized (under 36 inches in length) leopard sharks out of the San Francisco Bay and selling them to aquarium dealers in the U.S., the United Kingdom, and the Netherlands. These defendants will pay the following amounts for wildlife restoration:

U.S. Attorney Kevin V. Ryan stated, “As a result of this local and international investigation, $1.5 million has been designated, by restitution and donation, to the restoration of wildlife habitat in the San Francisco Bay. The prosecution of these six individuals, along with generous contributions from the California Coastal Conservancy, the David and Lucile Packard Foundation, the William and Flora Hewlett Foundation, and the Gordon and Betty Moore Foundation, has enabled federal and state authorities to devise means to further protect the California leopard shark. The U.S. Attorney’s Office is committed to prosecuting individuals that poach the wildlife protected by state and federal laws. I thank our partners in this investigation—NOAA Fisheries Service’s Office of Law Enforcement, U.S. Fish & Wildlife Service, the California Department of Fish & Game, the United Kingdom’s Department for Environmental Food and Rural Affairs, and the Netherlands General Inspection Service.”

These convictions are the result of an investigation conducted by NOAA Fisheries Service's Office of Law Enforcement in conjunction with the U.S. Fish & Wildlife Service, California Department of Fish & Game, the United Kingdom’s Department for Environment Food and Rural Affairs (DEFRA) Fish Health Inspectorate and The Netherlands General Inspection Service (AID).

The defendants’ admitted to the following in their plea agreements:

“The prosecution of this case casts a bright light on the dark world of illegal worldwide trading in protected wildlife. These leopard sharks were smuggled from California to profit-motivated dealers throughout the United States, and in Europe. But the work of our special agents here, and across the country illustrates that no matter where you are located, if you are illegally buying or selling protected wildlife you will be caught, and you will pay a price for breaking wildlife law,” said Paul Chang, Special Agent in Charge of the U.S. Fish and Wildlife Service Office of Law Enforcement, Pacific Region.

In January 1994, California leopard sharks were afforded extra protection under California State law when the California Department of Fish & Game Code placed a minimum size limit of 36 inches for any commercial take of the species within California jurisdiction. This size limit was implemented because the California leopard shark is a slow growing species that does not reach sexual maturity until between 7 to 13 years of age. The species may live as long as 30 years. Because of these factors and others, including increased commercial and sport fishing, California State wildlife authorities have established these management measures to ensure the species’ ability to maintain healthy stocks in the wild.

The investigation began in Miami, when a pet trade distributor was caught with 18 undersized leopard sharks from California and was convicted in 2003 of one count in violation of the Lacey Act and received an 18 month sentence. The Chicago U.S. Attorney's Office entered into pretrial diversion with two individuals associated with the case who agreed to pay $5,000 each and perform community service. The U.S. Attorney’s office in Los Angeles has also prosecuted individuals in connection with this case. The investigation led back to the Bay Area where the principal suppliers were located.

Maureen Bessette and Stacey Geis are the Assistant U.S. Attorneys prosecuting the case with the assistance of Cynthia Daniel and Ana Guerra.