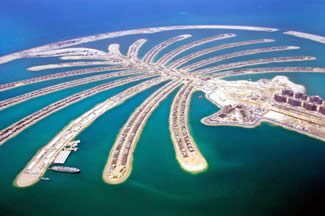 In this photo, construction goes on at Jumeira Palm Island in Dubai, United Arab Emirates.

DUBAI, United Arab Emirates -- With 14,000 laborers toiling day and night, the first of Dubai's three palm-shaped islands is finally about to get its first residents.

The Palm Jumeirah, a 31-square-kilometer island group, is part of what's billed as the largest land-reclamation project in the world, involving the hauling of millions of tons of Gulf sand and quarried rock over five years.

On November 30, the palm will open to some 4,000 residents, said Issam Kazim, a spokesman for Dubai's state-owned developer Nakheel.

When fully complete by 2010, the Palm Jumeirah will be an offshore city, with some 60,000 residents and at least 50,000 workers in 32 hotels and dozens of shops and attractions, according to Nakheel.

Observers say they are surprised that the fledgling developer has been able to build such a complex project more or less as planned, albeit with several snags that delayed the opening from last year.

"The project has captured people's imagination," said Colin Foreman of the Middle East Economic Digest. "Nothing like it has been done anywhere else in the world."

The US$14 billion project is a key part of this booming city's ambitions to rival Singapore and Hong Kong as a business hub and surpass Las Vegas as a leisure capital.

The frenetic pace of development has utterly transformed Dubai from a sleepy trading and pearl-diving village in the 1950s to a flashy metropolis of 1.5 million.

The island's construction has not all been smooth, and most buyers were supposed to get keys to their island homes a year ago.

Some of the new land sank and Nakheel needed an extra year to add more sand and pack it with vibrating land compactors, Kazim said.

Reports from those who have wandered through the island's giant homes describe them as cheaply finished and set uncomfortably close to one another. Nakheel rejected an Associated Press request to visit the island.

Overburdened roads in Dubai's Jumeirah Beach neighborhood are expected to clog further as people begin moving onto the island, accessible, for now, by a single bridge. Those moving onto the Palm Jumeirah this year will have to live with construction for another three years, and then an influx of tourists. Most of the owners are foreigners, with Britons making up the largest group, Kazim said.

Dubai's government expects the Palm Jumeirah to become a signature tourist attraction, bringing in as many as 20,000 daily visitors, Kazim said.

Meanwhile, laborers living in a cruise ship moored offshore are scrambling to finish enormous concrete houses that are crammed together on the palm island's 17 "fronds." The fronds are narrow peninsulas as long as 1.6 kilometers, attached to the island's main trunk. Nakheel will hand keys to owners of 1,350 homes by November 30, Kazim said.

Many observers believe Dubai's frenetic homebuilding will soon outstrip demand. "We've still got a shortage of properties in Dubai, but that's likely to become an excess in next six or 12 months," said Steve Brice, an economist with Standard Chartered Bank in Dubai.