Magnificent Deep-Sea Corals Discovered In The Mediterranean; 'We Did Not Expect, Know, Or Even Imagine' 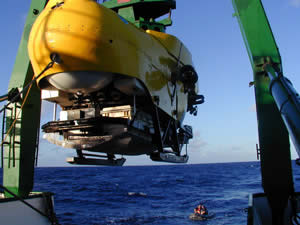 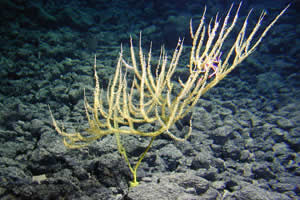 This five-foot tall yellow bamboo coral, in 4,787 feet of water, represents a new species and a new genus of bamboo coral. Credit NOAA

WASHINGTON, D.C. -- Scientists identified seven new species of bamboo coral discovered on a NOAA-funded mission in the deep waters of the Papahānaumokuākea Marine National Monument. Six of these species may represent entirely new genera, a remarkable feat given the broad classification a genus represents. A genus is a major category in the classification of organisms, ranking above a species and below a family. Scientists expect to identify more new species as analysis of samples continues.

“These discoveries are important, because deep-sea corals support diverse seafloor ecosystems and also because these corals may be among the first marine organisms to be affected by ocean acidification,” said Richard Spinrad, Ph.D., NOAA’s assistant administrator for Oceanic and Atmospheric Research. Ocean acidification is a change in ocean chemistry due to excess carbon dioxide. Researchers have seen adverse changes in marine life with calcium-carbonate shells, such as corals, because of acidified ocean water.

“Deep-sea bamboo corals also produce growth rings much as trees do, and can provide a much-needed view of how deep ocean conditions change through time,” said Spinrad.

Rob Dunbar, a Stanford University scientist, was studying long-term climate data by examining long-lived corals. “We found live, 4,000-year-old corals in the Monument – meaning 4,000 years worth of information about what has been going on in the deep ocean interior.”

“Studying these corals can help us understand how they survive for such long periods of time, as well as how they may respond to climate change in the future,” said Dunbar.

Among the other findings were a five-foot tall yellow bamboo coral tree that had never been described before, new beds of living deepwater coral and sponges, and a giant sponge scientists dubbed the “cauldron sponge,” approximately three feet tall and three feet across. Scientists collected two other sponges which have not yet been analyzed, but may represent new species or genera as well.

The mission also discovered a “coral graveyard” covering about 10,000 square feet on a seamount’s summit, more than 2,000 feet deep. Scientists estimated the death of the community occurred several thousand to potentially more than a million years ago, but did not know why the community died. The species of coral had never been recorded in Hawaii before, according a Smithsonian Institution coral expert they consulted.

Finding new species was not an express purpose of the research mission, but Dunbar and Christopher Kelley, a scientist with the University of Hawaii, both collected specimens that looked unusual. Kelley’s objective was to locate and predict locations of high density deep-sea coral beds in the Monument. NOAA scientist Frank Parrish also led a portion of the mission, focusing on growth rates of deep-sea corals.

The three-week research mission ended in November 2007, but analysis of specimens is ongoing. “The potential for more discoveries is high, but these deep-sea corals are not protected everywhere as they are here, and can easily be destroyed,” said Kelley.

he Papahānaumokuākea Marine National Monument has more deep water than any other U.S. protected area, with more than 98 percent below SCUBA-diving depths and only accessible to submersibles. The Hawaii Undersea Research Laboratory, sponsored by NOAA and the University of Hawaii, piloted the Pisces V submersible from a research vessel to the discovery sites, between 3,300 and 4,200 feet deep.

Funding for the mission was provided by NOAA through the Papahānaumokuākea Marine National Monument and NOAA’s Office of Ocean Exploration and Research. Identification of the corals was provided by Les Watling at the University of Hawaii.

The Papahānaumokuākea Marine National Monument is administered jointly by the Department of Commerce, Department of the Interior, and the State of Hawaii and represents a cooperative conservation approach to protecting the entire ecosystem.

NOAA’s Office of Ocean Exploration explores the Earth’s largely unknown ocean for the purpose of discovery and the advancement of knowledge, using state-of-the-art technologies.