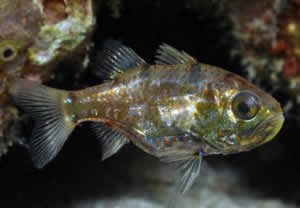 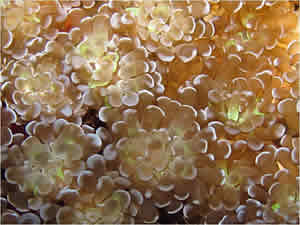 The survey, part of CI's 20-year long Rapid Assessment Program (RAP), was undertaken by CI at the request of the Bali provincial government and the Department of Fisheries and Marine Affairs to assess reef health and provide management recommendations for 25 areas proposed to be developed into a network of Marine Protected Areas (MPA) in Bali, which will be designed to be ecologically-connected and resilient.

Among the potentially new species documented were two types of cardinalfish, two varieties of dottybacks, a garden eel, a sand perch, a fang blenny, a new species of goby and a previously unknown Euphyllia bubble coral. Further study will need to be done to confirm the taxonomy of each species.

This RAP survey, along with a previous survey conducted by CI and partners for the Bali government in November of 2008, documented 953 species of reef fish and 397 species of coral in the waters off the coast of Bali.

"We carried out this present survey in 33 sites around Bali, nearly completing a circle around it, and were impressed by much of what we saw" said Dr. Mark Erdmann, senior advisor for the CI Indonesia marine program. "There was a tremendous variety of habitats, surprisingly high levels of diversity and the coral reefs appeared to be in an active stage of recovery from bleaching, destructive fishing and crown-of-thorns starfish outbreaks in the 1990's."

Acting Executive Director for CI-Indonesia Ketut Sarjana Putra added, "Compared to twelve years ago, we observed an increase in healthy coral reef cover in the area surveyed, indicating a recovery phase. That is why it needs serious protection and management, to complete the revitalization."

Though the survey found the reefs to be recovering well, with a seven-to-one ratio of live to dead coral, the RAP survey team observed that commercially important reef fish were severely depleted. In over 350 man-hours of diving, the team only observed a total of 3 reef sharks and 3 Napoleon wrasse â a stark contrast to a healthy reef system where a diver would readily encounter this number of large reef predators in a single dive. The team also saw that plastic pollution was omnipresent and noted the encroachment of fishers on no-take areas in the West Bali National Park.

"This RAP survey highlights how important these Marine Protected Areas are to improving economic returns from marine tourism while also providing food security and ensuring the sustainability of small-scale artisanal fisheries," Erdmann said.

Among the recommendations made by the CI team are a prioritization of which areas need immediate protection, the need for spatial planning to reduce the clash between marine tourism and many unsustainable fishing practices, the need to commit to enforcement and public funding to manage the MPAs and the need for strict measures to be put in place to manage pollution from plastics, sewage and agricultural runoff.

CI's partners in the Marine RAP survey include the Bali Government's Office of Marine Affairs and theBali Department of Fisheries, as well as the Marine Research and Observation Office and Warmadewa University.

Funding for the scientific survey was provided by USAID Indonesia as part of Coral Triangle Support Partnership (CTSP). The Coral Triangle Support Partnership-Indonesia (CTSP-I) is a collaborative five-year project to bring about the protection of marine systems and their myriad habitats for the benefit and sustainable livelihoods of communities across the Coral Triangle Region of Indonesia, which is the global center of marine biodiversity â with the most diverse marine ecosystems in the world, and more than 500 species of coral, at least 3,000 species of fish and the greatest remaining mangrove forests on Earth.