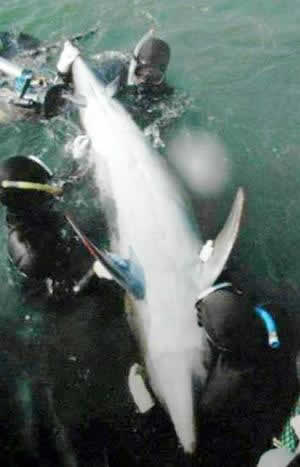 The dolphin discovered with an extra set of fins may provide further evidence that ocean-dwelling mammals once lived on land. 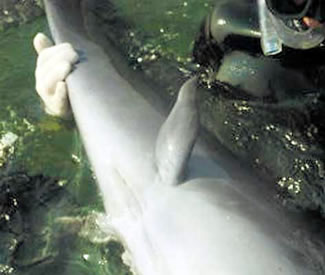 Japanese researchers said Sunday that a bottlenose dolphin captured last month has an extra set of fins that could be the remains of hind legs, a discovery that may provide further evidence that ocean-dwelling mammals once lived on land.

Fishermen captured the four-finned dolphin alive off the coast of Wakayama prefecture (state) in western Japan on Oct. 28, and alerted the nearby Taiji Whaling Museum, according to museum director Katsuki Hayashi.

Fossil remains show dolphins and whales were four-footed land animals about 50 million years ago and share the same common ancestor as hippos and deer. Scientists believe they later transitioned to an aquatic lifestyle and their hind limbs disappeared.

Whale and dolphin fetuses also show signs of hind protrusions but these generally disappear before birth.

Though odd-shaped protrusions have been found near the tails of dolphins and whales captured in the past, researchers say this was the first time one had been found with well-developed, symmetrical fins, Hayashi said.

"I believe the fins may be remains from the time when dolphins' ancient ancestors lived on land ... this is an unprecedented discovery," Seiji Osumi, an adviser at Tokyo's Institute of Cetacean Research, said at a news conference televised Sunday.

The second set of fins, much smaller than the dolphin's front fins, are about the size of human hands and protrude from near the tail on the dolphin's underside. The dolphin measures 8.92 feet and is about five years old, according to the museum.

Hayashi said he could not tell from watching the dolphin swim in a musuem tank whether it used its back fins to maneuver.

A freak mutation may have caused the ancient trait to reassert itself, Osumi said. The dolphin will be kept at the Taiji museum to undergo X- ray and DNA tests, according to Hayashi.