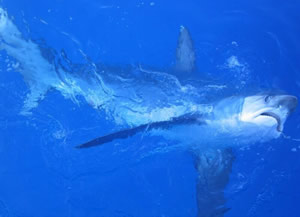 MANOA, Hawaii -- Tuna fishers who network with their competition may be able to stop thousands of sharks a year from being accidentally captured and killed in the Pacific Ocean.

Researchers from the ARC Centre of Excellence for Coral Reef Studies at James Cook University and the University of Hawaiʻi found if fishers communicated more with their rivals, it could lead to more sustainable fishing practices.

"Forty-six thousand sharks could have been saved if information about avoiding sharks was shared freely between fishing groups," says lead author Michele Barnes.

Barnes interviewed nearly every single Hawaiʻi-based longline tuna fisher and found there were three distinct groups, based on who they shared information with.

"To use the phrase, 'birds of a feather flock together,' we definitely found that to be the case here -- fishers primarily shared information with those most similar to themselves," she said.

The research team found that these "cliques" prevented communication to come up with strategies to catch fewer sharks and more tuna.

Bycatch, which is the accidental capture of non-target species, is a big global problem. In longline tuna fisheries, where fishers hang thousands of hooks from a mainline stretching up to 45 nautical miles, 100 sharks can be caught on a single line.

"Shark bycatch has significant ecological implications because many species of shark are in sharp decline. But when sharks are accidentally caught, there are also economic implications because it takes time for fishers to cut them off the line, they risk losing their gear, and it can be dangerous," says UH co-author John Lynham.

"It's unclear whether fishers are even aware that some groups have learned how to avoid sharks more effectively, so sharing this information with them is the first critical step," says Barnes.

"Sharks are vital to the health of the oceans, and fishing supports the livelihoods of millions of people across the globe. So when we can find simple, low-cost ways to reduce the number of sharks that are accidentally caught, it's great for fishers, and for the oceans."

The paper, titled "Social Networks and Environmental Outcomes," has been published in the journal Proceedings of the National Academy of Sciences.