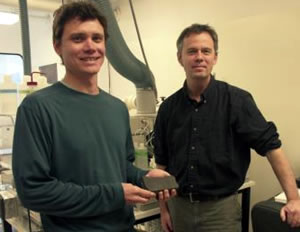 Clinton Scott (left), the first author of the research paper, is a graduate student working in the laboratory of Timothy Lyons (right)

RIVERSIDE, California -- A deficiency of oxygen and the heavy metal molybdenum in the ancient deep ocean may have delayed the evolution of animal life on Earth by nearly two billion years, a study led by UC Riverside biogeochemists has found.

The researchers arrived at their result by tracking molybdenum in black shales, which are a kind of sedimentary rock rich in organic matter and usually found in the deep ocean. Molybdenum is a key micronutrient for life and serves as a proxy for oceanic and atmospheric oxygen amounts.

Study results appear in the March 27 issue of Nature.

Following the initial rise of oxygen in the Earth’s atmosphere 2.4 billion years ago, oxygen was transferred to the surface ocean to support oxygen-demanding microorganims. Yet the diversity of these single-celled life forms remained low, and their multicellular ancestors, the animals, did not appear until about 600 million years ago, explained Timothy Lyons, a professor of biogeochemistry in the Department of Earth Sciences and one of the study’s authors.

Suspecting that deficiencies in oxygen and molybdenum might explain this evolutionary lag, Lyons and his colleagues measured abundances of molybdenum in ancient marine sediments over time to estimate how much of the metal had been dissolved in the seawater in which the sediments formed.

The researchers found significant, firsthand evidence for a molybdenum-depleted ocean relative to the high levels measured in modern, oxygen-rich seawater.

“These molybdenum depletions may have retarded the development of complex life such as animals for almost two billion years of Earth history,” Lyons said. “The amount of molybdenum in the ocean probably played a major role in the development of early life. As in the case of iron today, molybdenum can be thought of as a life-affirming micronutrient that regulates the biological cycling of nitrogen in the ocean.

“At the same time, molybdenum’s low abundance in the early ocean tracks the global extent of oxygen-poor seawater and implies that the amount of oxygen in the atmosphere was still low.

“Knowing the amount of oxygen in the early ocean is important for many reasons, including a refined understanding of how and when appreciable oxygen first began to accumulate in the atmosphere,” Lyons said. “These steps in oxygenation are what gave rise ultimately to the first animals almost 600 million years ago – just the last tenth or so of Earth history.”

For animal life to commence, survive and eventually expand on Earth, a threshold amount of oxygen – estimated to be on the order of 1 to 10 percent of present atmospheric levels of oxygen – was needed.

Past research has shown that Earth’s oxygenation occurred in two major steps:

The first step, around 2.4 billion years ago, took place as the ocean transitioned to a state where only the surface ocean was oxygenated by photosynthesizing bacteria, while the deep ocean was relatively oxygen-free.

The second step, around 600 million years ago, marked the occasion when the entire ocean became fully oxygenated through a process not yet fully understood.

“We wanted to know what the state of the ocean was between the two steps,” said Clinton Scott, a graduate student working in Lyons’s lab and the first author of the research paper. “By tracking molybdenum in shales rich in organic matter, we found the deep ocean remained oxygen- and molybdenum-deficient after the first step. This condition may have had a negative impact on the evolution of early eukaryotes, our single-celled ancestors. The molybdenum record also tells us that the deep ocean was already fully oxygenated by around 550 million years ago.”

According to Scott, the timing of the oxygenation steps suggests that significant events in Earth history are related. Scientists have long speculated that the evolution of the first animals was linked somehow to the so-called Snowball Earth hypothesis, which posits that the Earth was covered from pole to pole in a thick sheet of ice for millions of years at a time. “The second oxygenation step took place not long after the last Snowball Earth episode ended around 600 million years ago,” Scott said. “So one question is: Did this global glaciation play a role in the increasing abundance of oxygen which, in turn, enabled the evolution of animals?”