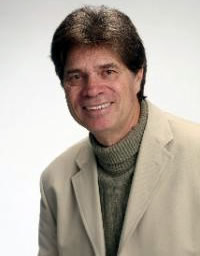 Tommy Dickey was awarded the Secretary of the Navy and Chief of Naval Operations Chair in Oceanographic Sciences. credit UCSB

SANTA BARBARA, California -- UC Santa Barbara oceanographer Tommy Dickey is one of two leading scientists nationwide to be awarded a prestigious Secretary of the Navy and Chief of Naval Operations Chair in Oceanographic Sciences.

The Office of Naval Research Program recognizes pioneering academic leaders in oceanography with collaborations across scientific disciplines. It provides $1.2 million over four years for multidisciplinary research and encourages the development of future ocean researchers through graduate student support.

Dickey, a professor in the Department of Geography, is principal investigator of UCSB's Ocean Physics Laboratory. His primary research interest is interdisciplinary oceanography, with an emphasis on upper ocean dynamics and bio-optical variability. He has used new technologies in the deployment of physical, chemical, biological, and optical instrumentation on autonomous platforms in coastal and deep open-ocean settings around the world. The recorded data are returned by satellite communication.

Dickey's innovative research has spanned and linked the sub-disciplines of physical, optical, geological, chemical, and biological oceanography and has led to new interdisciplinary observational capabilities that have vastly increased the number of measurable variables and expanded observable time and space scales. He has also been one of the leaders in the development of bio-optical oceanography, an area of special interest to the Navy.

"This award represents a significant milestone in my career here at UCSB," said Dickey. "It will enable me to pursue additional research and perform advanced analyses and observations that I would not otherwise be able to do. In addition, I plan to complete a second textbook, this one on the applications of optics for oceanography."

With the federal support, Dickey and his research team will explore ocean responses to hurricanes, mesoscale eddies, and optical variability forced by ocean dynamics. As part of the ocean optics portion of the project, he will be leading an Office of Naval Research Program that will conduct field experiments in the Santa Barbara Channel later this year and in the Pacific Ocean off of the Hawaiian Islands in 2009.

Dickey received his Ph.D. from Princeton University in geophysical fluid dynamics and has been a member of the UCSB faculty since 1996. A fellow of the American Geophysical Union, he has served as an editor for six scientific journals and has led six major multi-institutional ocean research programs sponsored by the Office of Naval Research.

Thomas Sanford, professor of oceanography at the University of Washington, was also awarded a Naval chair this year.