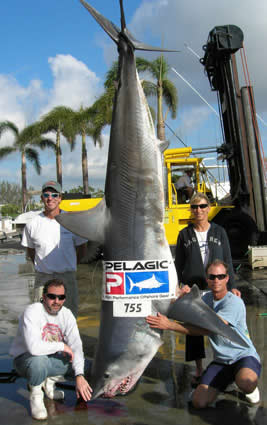 Capt. Cory Burlew and his friends had already had a good night of swordfishing when things got a lot more exciting and exhausting.

"It's a once in a lifetime experience, I tell you," Royal said. "Cory's been trying for 15 years to catch a big mako."

The anglers, who all live in Deerfield Beach, went out Sunday evening for swordfish and were not disappointed.

"The night started off with a swordfish doubleheader," said Burlew, who runs fishing charters on the 55-foot Reaper out of Marina One in Deerfield Beach. "One got off right away. We fought the other one, which was about 160, 180 pounds, a long time, then it pulled the hook."

Around midnight they boated a 70-pound swordfish. While Burlew was taking care of the fish, the mako swam up to the boat and went after one of the swordfish baits, a live tinker mackerel that was on an 80-pound outfit.

The mako got foul-hooked in one of its pectoral fins and took off.

"The way it was running, I told my buddy it was probably a nice mako," Burlew said. "I didn't know it was that big."

Things quickly got interesting as the big shark proceeded to dump the reel and its 950 yards of line.

"It just peeled through that thing like it was nothing," Burlew said. "I had to hook it up to another rod, a 130 that I had just filled, and we had to throw the [80-pound] rod in the water."

Everyone took a turn fighting the mako. Eventually, the 80-pound outfit came back into the boat. The battle continued with that outfit and the shark finally came to the boat at 4:30 a.m.

That's when the real work began. "When it came time to gaff it, that's what tired us out," Burlew said. "We couldn't get it into the boat."

After an hour of trying, the crew instead tied the shark to the boat and towed it back. By then, Reaper was 15 miles off Boynton Beach. The weary crew arrived at Marina One at 9 a.m. Monday, where they weighed the shark and cut it up. Makos are delicious and there were plenty of shark steaks to go around.

"There are so many families that got food," Royal said, adding that Burlew will probably mount the shark's head or its jaws. "None of it was wasted."