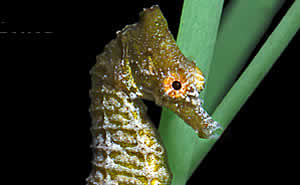 NEW ORLEANS, Louisiana -- The Center for Biological Diversity today filed a petition seeking Endangered Species Act protection for the dwarf seahorse, a one-inch long seahorse that lives in seagrass beds in the Gulf of Mexico, Florida and the Caribbean. The seahorse is threatened with extinction due to pollution from the BP Deepwater Horizon oil spill, decline of seagrass throughout its range and commercial collection.

"Our country's tiniest seahorse is just one of the many victims of ongoing pollution from the Gulf oil spill disaster," said Tierra Curry, conservation biologist at the Center and author of the petition. "The dwarf seahorse now needs Endangered Species Act protection to have a fighting chance of survival."

The dwarf seahorse was declining even before the BP oil spill contaminated much of its remaining range. Oil pollution and dispersants used to break up oil are toxic to both seahorses and the seagrasses they need to survive.

"Oil spills like the one nearly a year ago in the Gulf of Mexico exact a long and terrible toll on marine life, especially species like the dwarf seahorse that have already been struggling to survive," Curry said. "These kinds of catastrophic spills will continue to be a threat as long as our country continues to push for more and more offshore drilling."

Since 1950 the state of Florida has lost more than half its seagrasses, with loss in some areas exceeding 90 percent. Seagrass loss has also been dramatic in Alabama, Mississippi, Louisiana, Texas and the Bahamas. Because the dwarf seahorse is a habitat specialist, loss of seagrass equates directly to seahorse population declines.

The dwarf seahorse is the smallest of the four seahorse species found in the United States, and it is the third-smallest seahorse in the world. In addition to oil pollution, the seahorse's seagrass habitat is threatened by declining water quality, damage from boat propellers and shrimp trawlers, and global climate change.

Seahorses are unique in that the males become pregnant and give birth to miniature versions of the adults. Seahorses form monogamous pair bonds, and partners meet each morning and perform a daily greeting ritual. Males wrestle with each other for access to mates, but once a pair bond is formed, seahorse couples ignore other seahorses. Dwarf seahorses live for only one year.