Research: Tiny 'Housekeeper' Crab Keeps Coral Healthy; 'We Do Know That They are 'Picky'' 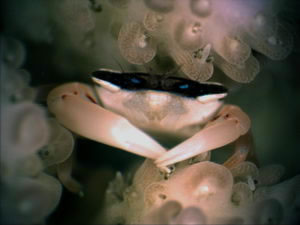 SANTA BARBARA, California -- The story of the relationship between the crab and the coral is described in the November 2006 issue of the journal Coral Reefs and is now available on-line. The coral provides a home and protection for the crabs. The crabs provide "housekeeping" duties for the coral, routinely "sweeping" out sediment that falls onto the coral, according to the study.

Thus the relationship between the corals and the trapeziid crabs is mutually beneficial, or symbiotic. The little crabs, measuring only a centimeter wide, make their home in branching corals like Acropora or Pocillopora. The research was done on coral reefs near the shore of the French Polynesian island of Moorea, in the South Pacific.

"Although we don't know much about these crabs, we do know that they are 'picky,' and are always tasting and exploring," said Hannah L. Stewart, first author of the paper and a postdoctoral researcher at UCSB's Marine Science Institute (MSI). "They use their front appendages to manipulate and shovel out the sediment."

Stewart said that this family of crabs is common around the world. "This relationship probably occurs all over the Pacific and is likely more ubiquitous than we know," she said. "Crabs are in corals everywhere. There are major ecological implications to this research; species of crabs that associate with corals may be more important than we realized."

She explained that coral reefs are one of the most productive and diverse ecosystems in the world. They support more than nine million species and provide a livelihood for millions of people around the globe.

The accumulation of sediment on coral tissue is known to reduce metabolic and tissue growth rates of coral, increasing the probability of bleaching and coral death. Many corals can remove some sediment from their surfaces but high sediment loads can be deadly. Predicted increases in sedimentation threaten coral reefs in many near shore areas around the world.

Coral reefs are threatened by a variety of environmental changes. For example, higher water temperatures and increased ultraviolet radiation, which are associated with climate change, are sources of widespread coral bleaching. Changing land use patterns, caused by population increase on the coasts, are another threat because population growth increases the sediment load on coral. This is due to the higher amount of water run-off from development, deforestation with erosion, and expansion of agriculture.

The studies were conducted as part of The Moorea Coral Reef Long Term Ecological Research Site (MCR LTER), located in the complex of coral reefs and lagoons that surround the island of Moorea. Stewart performed the research with Sally Holbrook, professor and vice chair of UCSB's Department of Ecology, Evolution and Marine Biology; Russell Schmitt, a professor in the same department and the director of the MSI's Coastal Research Center; and Andrew Brooks, assistant research biologist at the MSI and deputy director of the MCR LTER. Experiments were carried out in the coral reef as well as in the laboratory.

The scientists showed the importance of trapeziid crabs by gently removing crabs from sections of the two species of branching corals on a coastal reef. This resulted in 50 to 80 percent of those corals dying in less than a month. By contrast, all corals with crabs survived. The nature of this common symbiotic relationship had not been recognized until this study.

For surviving corals that lacked crabs, growth was slower, tissue bleaching was greater, and sediment load was higher. Laboratory experiments revealed that corals with crabs not only shed substantially more of the sediments deposited on coral surfaces, but also that crabs were most effective at removing grain sizes that were most damaging to coral tissues. These were the largest grains studied, those measuring two to four millimeters in width.