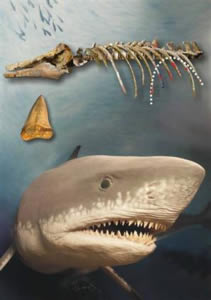 The skeleton of a dolphin, preserved for 4 million years, shows shark bite marks across its ribs. Credit: Giovanni Bianucci

PISA, Italy -- It might sound like a mashup of monster movies, but palaeontologists have discovered evidence of how an extinct shark attacked its prey, reconstructing a killing that took place 4 million years ago.

Such fossil evidence of behavior is incredibly rare, but by careful, forensic-style analysis of bite marks on an otherwise well-preserved dolphin skeleton, the research team, based in Pisa, Italy, have reconstructed the events that led to the death of the dolphin, and determined the probably identity of the killer: a 4 m shark by the name of Cosmopolitodus hastalis.

The evidence, published in the latest issue of the journal Palaeontology, comes from the fossilized skeleton of a 2.8 m long dolphin discovered in the Piedmont region of northern Italy.

According to Giovanni Bianucci, who led the study: "the skeleton lay unstudied in a museum in Torino for more than a century, but when I examined it, as part of a larger study of fossil dolphins, I noticed the bite marks on the ribs, vertebrae and jaws. Identifying the victim of the attack was the easy part - it's an extinct species of dolphin known as Astadelphis gastaldii– working out the identity of the killer called for some serious detective work, as the only evidence to go on was the bite marks."

The overall shape of the bite indicated a shark attack, and Bianucci called in fossil shark expert Walter Landini. "The smoothness of the bite marks on the ribs clearly shows that the teeth of whatever did the biting were not serrated, and that immediately ruled out some possibilities. We simulated bite marks of the potential culprits and, by comparing them with the shape and size of the marks on the fossils, we narrowed it down to Cosmopolitodus hastalis." Circumstantial evidence also supports this verdict: fossil teeth from Cosmopolitodus are common in the rock sequences that the dolphin was found in. "From the size of the bite, we reckon that this particular shark was about 4 m long" says Landini.

Detailed analysis of the bite pattern allowed the researchers to go even further. "The deepest and clearest incisions are on the ribs of the dolphin" says Bianucci, "indicating the shark attached from below, biting into the abdomen. Caught in the powerful bite, the dolphin would have struggled, and the shark probably detached a big amount of flesh by shaking its body from side to side. The bite would have caused severe damage and intense blood loss, because of the dense network of nerves, blood vessels and vital organs in this area. Then, already dead or in a state of shock, the dolphin rolled onto its back, and the shark bit again, close to the fleshy dorsal fin."

The study is significant because of the rarity of such 'fossilized behaviour'. According to Dr Kenshu Shimada, fossil shark expert at DePaul University and the Sternberg Museum of Natural History in the US, "studies like this are important because they give us a glimpse of the ecological interactions between organisms in prehistoric seas. Shark teeth are among the most common vertebrate remains in the fossil record, yet interpreting the details of diet and feeding behaviour of extinct sharks is extremely difficult. Fossil remains of prey species with shark bite marks, like those described by Bianucci and his team, provide direct evidence of what each prehistoric shark ate and how it behaved."