Scientists Are First To 'unlock' The Mystery Of Creating Cultured Pearls From The Queen Conch; 'Truly Top-quality Gems' 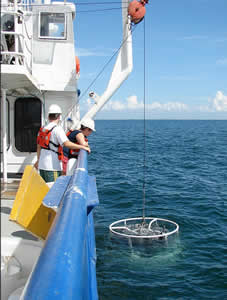 MIAMI, Florida -- Last month, researchers at the Florida Fish and Wildlife Conservation Commission (FWC) published new findings on Florida's red tide organism, Karenia brevis, in a special issue of the scientific journal Harmful Algae. This publication is the culmination of an unprecedented collaboration on red tide research in the Gulf of Mexico led by the FWC's Fish and Wildlife Research Institute (FWRI) and funded by the National Oceanic and Atmospheric Administration (NOAA).

From this work, researchers unveiled that Karenia brevis uses a variety of nutrients from different sources, including offshore blooms of another algae species, Trichodesmium, as well as decaying fish that die during blooms. Researchers quantified the relative roles of these nutrient sources in affecting blooms.

They also confirmed the importance of physical forces in the occurrence of nearshore blooms of Karenia brevis. In 2010, this red tide organism did not bloom on the southwest Florida shelf because deeper water did not transport source populations to shore; this phenomenon was in stark contrast to 2008, 2009 and, particularly, 2007, when a massive bloom occurred.

Moreover, the work confirmed previous findings that blooms of this particular red tide species, Karenia brevis, are extremely complex and result from a particular suite of physical, chemical and biological factors. This study highlights that effective bloom management integrates short-term solutions of bloom prediction, such as the FWC/USFSP three-day forecasts, with longer-term solutions, including nutrient-reduction strategies.

This project and future projects like it are another step forward in understanding the red tide phenomenon.

"To obtain a comprehensive understanding of red tides in the Gulf of Mexico, we really needed to collaborate with experts across the many fields of marine science, as well as study variations in bloom conditions from year to year," explained Matt Garrett, a research associate at FWRI. "We were able to put together the big picture of these blooms, which are clearly affected by the physics, chemistry and biology in the ocean."

Lead investigators at the FWC brought together a diverse group of scientists that included algal biologists, physical oceanographers and chemists from six agencies and universities â the University of Maryland Center for Environmental Sciences, University of Miami, Mote Marine Laboratory, Old Dominion University, University of South Florida and the Virginia Institute of Marine Science â to understand the physical and chemical drivers of red tides.

The uniqueness of the project came not only from its multidisciplinary nature, but also from its duration and spatial coverage: Between 2007 and 2010, four 14-day research cruises along the southwest Florida shelf, from St. Petersburg to Marco Island and 70 miles offshore, were conducted. The field work was paired with in-depth laboratory studies, which focused on the physiology and ecology of the organism. Most importantly, researchers were able to study bloom and nonbloom years to understand the physical and environmental forces that can cause red tides of the harmful species Karenia brevis.