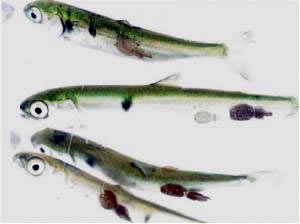 The following is the open letter, sent earlier to Prime Minister Stephan Harper and Premier Gordon Campbell of Canada, and signed by 18 respected scientists and researchers. The letter is as follows:

We, the undersigned, are convinced by the published scientific evidence that the debate is over; sea lice breeding on farmed salmon are threatening BC's wild Pacific salmon. There are many threats to wild salmon; however there is now extensive peer-reviewed science that sea lice spread from farm to wild salmon and kill juvenile wild salmon.

In some cases, sea lice originating from salmon farms are estimated to have killed up to 95% of the wild juvenile salmon that pass salmon farms during their ocean migrations. This is unacceptable for any industry.

John Fredriksen, owner of Marine Harvest, one of the biggest salmon farming companies, both globally and in Canada, recently stated publicly: "I am concerned about the future for wild salmon. Fish farming should not be allowed in fjords with salmon rivers" (Norwegian newspaper Altaposten July 19, 2007).

In consultation with the salmon farming industry and Fisheries and Oceans Canada, the Pacific Salmon Forum spent $315,000 of the public's funds collecting a baseline dataset to examine sea lice response to fallowing salmon farms. But as of today Marine Harvest and Mainstream Canada have restocked farms spanning the entire Broughton Archipelago.

Consequently this definitive study is no longer possible.

We have united our voices because wild salmon are essential to life in the North Pacific and to the BC economy. We feel the weight of scientific evidence is enough to enact the precautionary principle. For wild salmon to survive in an era of major environmental stresses through global climate change, a pathogen barrier must be established between BC's farmed and wild salmon populations; there are no scientific results to the contrary.

Furthermore, we are warning the BC public that where farmed and wild salmon populations meet in narrow marine passages, as in Broughton and off Campbell River, we can expect long-term wild salmon stock decline if farmed salmon are not quarantined.

When our government ignores the immutable natural law that disease is amplified when host populations are crowded, we pay the price of irreversible loss of a very valuable resource.

We the undersigned agree that based on the published scientific evidence, the only management action that can ensure the protection of wild salmon stocks from farmed salmon is a complete physical barrier to pathogen transmission between wild and farm salmon (closed containment).

We are aware that such changes may have economic consequences for the industry. The science is clear. It is now up to the government and the people of Canada to decide whether the economic benefits of aquaculture, as currently practiced, outweigh the threats to wild salmon and the ecosystems and economies that depend on healthy and abundant wild salmon populations.

We write this public letter out of a sense of duty to future generations.