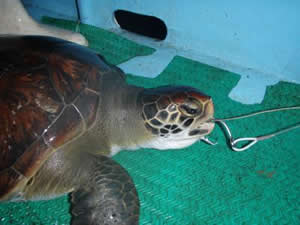 Researchers estimate 23,000 green turtles and 699,000 olive ridley turtles were captured by Costa Rican longliners between 1999 and 2010.

PHILADELPHIA, Pennsylvania -- The second-most-common catch on Costa Rica's longline fisheries in the last decade was not a commercial fish species. It was olive ridley sea turtles. These lines also caught more green turtles than most species of fish. These findings and more, reported in a new study in the Journal of Experimental Marine Biology and Ecology, indicate that the Costa Rican longline fishery represents a major threat to the survival of eastern Pacific populations of sea turtles as well as sharks.

The researchers argue that time and area closures for the fisheries are essential to protect these animals as well as to maintain the health of the commercial fishery.

The research was conducted by a team from Drexel University, the Costa Rican non-profit conservation organization Pretoma and a U.S. non-profit working in Costa Rica, The Leatherback Trust.

The researchers used data from scientific observers on longline fishing boats who recorded every fish and other animal caught by the fishermen from 1999 to 2010 and the locations of the captures and fishing efforts. Those data provided the basis for a mathematical analysis of the fishery resulting in maps of geographic locations and estimates of the total number of captures of sea turtles in the entire fishery.

The most commonly targeted fish, mahi mahi, was also the most common species caught in the Costa Rican longline fishery.

But the researchers were surprised by their finding that olive ridley turtles, internationally classified as vulnerable, were the second-most-common species caught.

"It is common to see sea turtles hooked on longlines along the coast of Guanacaste in Costa Rica. We can set some free but cannot free them all," said Dr. James Spotila, the Betz chair professor of environmental science in the College of Arts and Sciences at Drexel. "The effect of the rusty hooks may be to give the turtles a good dose of disease. No one knows because no one holds the turtle to see if its gets sick."

Spotila, a co-author of the study, has been studying sea turtles on the Pacific coast of Costa Rica with colleagues and Drexel students, for 23 years.

The researchers also noted that even a few deaths of reproductive females may have a significant toll -- particularly when longline operations are held in shallow waters of the continental shelf close to nesting beaches. They reported that declines in olive ridley nesting populations in Ostional, where massive synchronous nesting occurs, were associated with these captures.

In addition to mahi mahi, other species targeted in the Costa Rican longline fishery were tunas, sharks and marlins.

But the fishing patterns showed that shark populations have declined in numbers and sharks have become smaller over 11 years. Adult sharks were generally small, and juvenile sharks alarmingly abundant, suggesting that some shark species were being overfished: Overall, only 14.6 percent of the abundant silky sharks observed during the study period were sexually mature. In 2010, the last year of the study, average fork length of silky sharks was 97 cm, far below the observed 144 cm average for mature adults. These decreases in size of silky sharks through time indicated a reduction in relative numbers of adults in the population.

Additionally, many small blacktip sharks were captured in an area near the Osa Peninsula, indicating that fishing was occurring at a nursery ground for that species.

The small size of adult sharks and large numbers of juveniles captured suggest that species are being overfished.

In addition to these indicators of overfishing of sharks, the researchers warned of broader uncertainty about the health of the fishery. They said that capture of large numbers of mahi-mahi does not guarantee that that population is sustainable because the available data can not determine if mahi mahi will remain abundant or decline.

Based on these findings, the researchers caution that that populations of fish affected by the Costa Rican longline fishery may be in danger of collapse and that there are insufficient scientific data to predict whether and when such a collapse will occur and in what species.

How to manage the fishery and save the turtles

About 80 percent of captured turtles are released and survive in the short term, but long-term effects of being caught on fishing hooks are unknown.

To better manage the fishery and protect the threatened and endangered species of sea turtles in Costa Rica, the researchers argue that policymakers in Costa Rica must enforce time and area closures for longline fishing.

They criticize both the fishing industry and INCOPESCA, the fisheries management agency of the government, for failing to recognize that the fishery is unsustainable and failing to enforce existing fisheries laws, such as those against landing of shark fins and harming of sea turtles.

"INCOPESCA has failed to adequately study and regulate the fishery in Costa Rica for many years. It does not even enforce national laws. Board members have serious conflicts of interest because they are commercial fishermen," said Randall Arauz, president of Pretoma and a world recognized leader in marine conservation. "Until INCOPESCA is reformed in such a way that the Board of Directors is eliminated and its mission is to defend the public interest, neither the fish nor the turtles will be safe."

Arauz, a co-author of the study, has been studying sea turtles and fisheries in Costa Rica for more than 30 years. He directed the at sea observer program that collected the data on longline boats that were the basis for this study.

Aurauz and Spotila argue for the need to establish well-enforced marine protected areas where both turtles and fish are safe from longlines. They also recommend targeted seasonal closures to longline fishing in coastal waters close to the main turtle nesting beaches when and where sea turtle interactions with the fishery are highest.

They further recommend a general seasonal longline fishery closure for 5 months, from June to November, which can shift, according to the seasonal abundance of mahi mahi.

To enforce these recommendations and provide needed data to manage the fishery, they recommend placing observers on at least half of longline boats, as was done in Chile. Education of local artisanal fishermen would improve their fishing techniques and encourage them to release sea turtles unharmed.

"There is still time to save both the fishery and the turtles if action is taken soon," Arauz said.

In pursuit of such action, Pretoma and The Leatherback Trust are providing leadership for a coalition of environmental groups in Costa Rica who have united for a special marine conservation initiative called "Front for Our Oceans" (http://www.salvemosnuestrosmares.com/).

For fish and turtle populations to recover successfully, Spotila, who is also chairman of the board of The Leatherback Trust, said, "the challenge is to collect good data on the fishery, establish protected areas of refuge for the animals and to encourage or force INCOPESCA to enforce the laws that have been already passed by the national legislature. What is being done up until now obviously is not working."