Study Of Skates And Sharks Questions Assumptions About 'Essential' Genes

Scientist To Study If Tiny Nanoparticles May Pose Big Risks; 'We Are Just Beginning To Frame Questions' 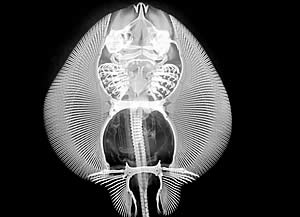 SALISBURY COVE, Maine -- Biologists have long assumed that all jawed vertebrates possess a full complement of nearly identical genes for critical aspects of their development. But a paper in the December 16 issue of Science with Benjamin King of the Mount Desert Island Biological Laboratory (MDIBL) as lead author shows that elasmobranchs, a subclass of cartilaginous fishes, lack a cluster of genes, HoxC, formerly thought to be essential for proper development.

Hox genes dictate the proper patterning of tissues during embryonic development in all bilateral animals, that is, those with a top and a bottom and a back and a front. In fruit flies, mutations in one Hox gene can lead to such miscues as legs growing where antenna should be. In mammals, Hox genes are required for the proper patterning of vertebrae and ribs. Hox genes are notable for being "co-linear," that is, the order they appear in the genome corresponds to the order of their expression in tissues of developing embryos from head to tail.

Fruit flies have one Hox cluster. In all the jawed vertebrates previously studied, scientists always found four copies of the Hox cluster. These clusters, named HoxA, HoxB, HoxC, and HoxD, are present in humans with roughly 10 genes in each cluster (39 in all). Prior to King's study, it was thought that all jawed vertebrates needed at least one gene from each of the four clusters for viable development. However, King and his colleagues call that fundamental assumption into question by offering compelling evidence that at least two elasmobranch fish, the little skate (Leucoraja erinacea) and the dogfish shark (Scyliorhincus canicula), lack the HoxC cluster.

King and his co-authors, Heather Carlisle and Randall Dahn from MDIBL and Andrew Gillis from Cambridge University, used high-throughput sequencing data to characterize all genes expressed in late-stage embryos from three cartilaginous fishes â the elephant shark (Callorhincus milii), dogfish shark (Scylliorhinus canicula), and little skate (Leucoraja erinacea). Studies by other researchers have shown that the elephant shark, which is not an elasmobranch but rather represents a subgroup of cartilaginous fishes called holocephali, has all four Hox clusters. King's sequence data confirmed this. However, the dogfish and skate did not express any HoxC genes.

Searching a draft 26x-coverage genome assembly for the skate, King found all HoxA, HoxB and HoxD cluster genes, but none of the HoxC genes. A separate group of researchers recently reported that they could not find any HoxC genes expressed or in the genome of the dogfish using traditional cloning techniques.

"A goal of the field of evolutionary developmental biology is to learn how developmental processes evolved by comparing many organisms with one another," says King. "Our work illustrates the value of studying elasmobranch fishes to gain new insights. If elasmobranchs do not need HoxC genes to develop properly, we must consider the possibility that there is more flexibility in the role of the various Hox clusters than we previously thought."

Genome sequence data for the skate was provided by the North East Cyberinfrastructure Consortium (NECC), a group researchers from five states (Maine, New Hampshire, Vermont, Rhode Island and Delaware) that includes King, who are working to characterize the skate and provide training in bioinformatics to students and faculty in these states.