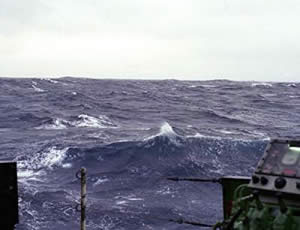 The exchange of gases between the oceans and the atmosphere has an important influence on climate. Credit: NOC

SOUTHAMPTON, Hampshire -- A team led by scientists at the United Kingdom's National Oceanography Centre have measured the air-sea exchange of carbon dioxide in the open ocean at higher wind speed then anyone else has ever managed. Their findings are important for understanding how interactions between the oceans and the atmosphere influence climate.

"Evaluating the factors influencing the transfer of gases such as carbon dioxide between the atmosphere and the ocean is needed for a full understanding of Earth's climate system," explained researcher John Prytherch of the National Oceanography Center.

The transfer of carbon dioxide across the sea surface depends on many factors and has been difficult to study over extended periods at sea. Understandably, therefore, there has been a lot of uncertainty about actual oceanic carbon dioxide fluxes, especially at high wind speeds.

To address this issue, Prytherch and his collaborators measured carbon dioxide fluxes in the North Atlantic during the High Wind Air-Sea Exchanges (HiWASE) experiment (September 2006âDecember 2009).

Using an autonomous system called 'Autoflux' installed on the Norwegian weather ship Polarfront, they made nearly 4,000 flux measurements, each one lasting 20 minutes. They also recorded wind speed and other variables such as seawater salinity.

"Our results include measurements made at higher mean wind speeds than previously published for the open ocean," said Prytherch: "Filling this knowledge gap is important because high wind speeds such as those experienced by the North Atlantic are expected to have a large effect on the global air-sea flux of carbon dioxide."

"Our results support the hypothesis that bubbles in whitecaps play a significant role in the global exchange of carbon dioxide and other climatically important gases between the oceans and the atmosphere," said Prytherch.