Research: Involvement Of Locals Important In Marine Park Success; 'There Is A Lot Of Ocean Out There To Patrol' 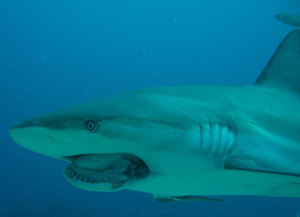 This specimen is no longer able to feed naturally due to its embedded hook. 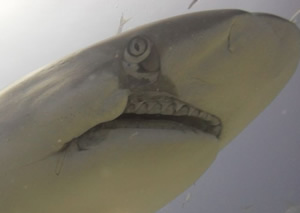 Shark with the left side of its face torn away leaving its eye-socket exposed.

ST. MAARTEN, Netherlands Antilles -- Recently the Nature Foundation has been receiving reports that individuals are trophy hunting the resident shark population within the Man of War Shoal Marine Park and subsequently killing them. Sharks have a very high value to the ecology of the island and the island coral reef ecosystem, and they also are a major attraction to visiting dive tourists. The majority of divers who visit the island hope to see a shark while diving. Aside from the above mentioned items the Nature Foundation as well as local dive operators are using sharks as a control method for the present lionfish invasion. Over the last weeks less and less sharks are being seen, and those that are being seen show disturbing signs of considerable fishing damage. One individual was seen with the left side of its face torn away leaving its eye-socket exposed. Another individual was seen with its jaw broken open being unable to feed. Populations have been going from approximately twenty individuals to now only two or three being seen in the locations where they are known to frequent.

Sharks are an apex predator and are essential to the health of local coral reefs. "If we do not have sharks we will loose our coral reef ecosystem. Sharks keep the reefs clean of unhealthy fish which keeps the ecosystem in balance. Also the majority of visiting divers come to see local coral reefs as well as sharks. A system collapse will occur if we loose these species and this very important tourism product will be lost" commented Nature Foundation Marine Park Manager Tadzio Bervoets.

"We have also been trying very hard to develop a way in which we introduce predatory species, particularly sharks, to Lionfish as a prey item in the hopes of controlling the infestation. We have been catching specimens and presenting them to sharks to increase the learning curve of them recognizing lionfish as a prey item. With the loss of this very important species the lionfish problem will only get worse" continued Bervoets.

The Nature Foundation has investigated the incidents and have found that they are not being caught by local traditional fishermen; rather they are being caught by sport fishermen who use expensive fishing gear and high powered boats. These individuals deliberately chum the water to catch and kill the animals, particularly at night. Many reports have been coming into the Nature Foundation office of persons witnessing the killing of sharks, again particularly at night. Local fishermen are also complaining about these incidents as the sharks are caught and left for dead. Divers have had to on many occasion remove hooks and lines attached to the sharks. Many sharks are not able to feed due to the damage caused by these irresponsible fishermen. There has also been evidence of baby sharks being fished after they have just been born.

During the signing Ceremony for the Man of War Shoal Marine Park the Minister of Tourism, Economic Affairs, Telecommunication and Transport the Honourable Minister Franklin Meyers was briefed on these incidents and the Minister assured that steps will be taken to ban the deliberate chumming and fishing for sharks in the territorial waters of St. Maarten. The presence of sharks are vital to the economy of St. Maarten, they are a major attraction to the island and if current trends continue the island will loose this vital tourism product and important revenue will be lost, not to mention the collapse of the coral reef ecosystem so important for diving, snorkelling, coastal protection and beach replenishment. The Nature Foundation will now initiate patrols carried out at night in order to combat the fishing of sharks.