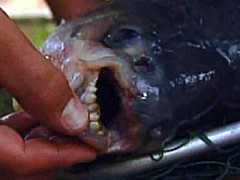 Late Tuesday afternoon, a fisherman hooked a fish he says he`s never seen before and lake officials are just as amazed: a 20-pound fish with what looks like human teeth.

Scott Curry has caught thousands of fish at Buffalo Springs Lake. He knew his catch was something special from the time he hooked it.

After reeling in the 20-pounder, Curry realized it wasn`t a typical catch. This one had teeth.

"I`ve lived out here 36-years, and I`ve never seen a fish like that out here in my life," says Greg Thornton, General Manager of Buffalo Springs Lake.

On Wednesday, Texas Parks & Wildflife identified the unusual catch as a Pacu, a fish found in South America.

"Some one likely got rid of it out here," thinks Thornton.

A game warden has taken pictures and will try to identify it in the next few days.

When Curry caught the fish, he said he saw another one just like it. Lake officials have put a bounty on that, anyone catching it will get $100.

If you want to see the unusual fish, it can be seen in the spring pond at Buffalo Springs Lake.