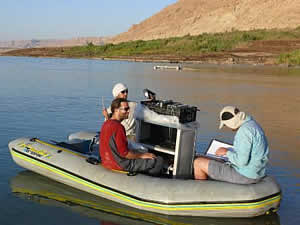 The team at the Dead Sea. credit: Dr. Christian Lott / The Hydra Institute

BEERSHEBA, Israel -- Ben-Gurion University researchers announced today that they have discovered deep springs on the floor of the Dead Sea, which provide fresh water to the rapidly dwindling lake. Meanwhile, a parallel study by German researchers has found new forms of life growing around the fissures in the sea floor.

The Dead Sea is shrinking as the water level drops at an alarming rate â about a meter a year. Israeli and German scientists have been researching groundwater springs which discharge from the sea floor to understand the impact of this process on this unique ecosystem. While the existence of springs has been known for decades as people observed ripples on the surface, the scientists have discovered deep springs not visible from shore.

As part of the German-funded SUMAR project, Department of Geography and Environmental Development Prof. Jonathan Laronne and research student Yaniv Munwes developed the first system to directly measure spring discharge and to study the structure of the upward jet-like, plume flow. Professional divers have been central to the sampling of the spring source, the understanding of flow structure, and the calculation of spring discharge and morphology based on submarine photography. The results show that there are systems of complex springs hundreds of meters long and as deep as 30 meters. The springs appear from the sea floor through craters as large as 15 meters in diameter and 20 meters deep âwith steep, finely laminated walls where there are alternating layers of sediment and minerals.

"By developing a measurement system for these springs, we will be able to determine more accurately how much water is really coming in to the Dead Sea," commented Laronne. The Dead Sea has been gradually evaporating as its main source of fresh water, the Jordan River, has been siphoned off just below the Sea of Galilee for drinking water for Israelis, Palestinians and Jordanians.

While researchers have known for decades that the "Dead Sea" was a misnomer, the rich variety of life as evidenced in the vicinity of the springs was unexpected, says Dr. Danny Ionescu of the Microsensor Group, Max Planck Institute for Marine Microbiology, Bremen, Germany who is leading the study of the micro-organisms. While fish are not present, carpets of micro-organisms that cover large seafloor areas contain considerable richness of species, he says. Ionescu has shown that some had been heretofore unknown in such highly saline environments and many of them are unknown to science altogether.

"The biofilms we found contain phototrophs and sulfide oxidizers and many other species â most of the findings rely on molecular analysis â and our next expedition in October will deal with the actual activity of these organisms - and the many more questions that arose from these findings," he says. According to Ionescu's findings, these are not the same micro-organisms and algae which colored the Dead Sea red in 1992, and their discovery opens the door to some novel questions such as: How do they survive and what is their energy source?

The hydrological connection between the mountain aquifer, springs occurring on land and submarine springs is being examined by Dr. Christian Siebert, Dr. Stefan Geyer and PhD student Ulf Mallast from the Hemholtz Centre for Environmental Research - UFZ, Halle, Germany. Comparisons of both systems have demonstrated their considerable complexity. The chemical properties of the springs' water cannot be the result solely of the mixing of freshwater and Dead Sea water. We have evidence of mineral dissolution and bacterial activity which alter the water composition, they said. The significance of these subterranean processes remains to be evaluated.

Prof. Aharon Oren of the Department of Plant & Environmental Sciences of the Hebrew University of Jerusalem, a Dead Sea expert, is also part of the multi-disciplinary research team.