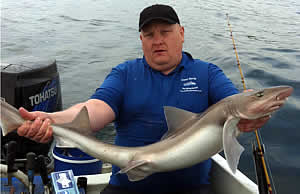 Two of the largest smoothhound ever seen in Scottish waters were recently tagged and released.

RENFREWSHIRE, Scotland -- Two of the largest smoothhound ever seen in Scottish waters were recently tagged and released by members of the Scottish Shark Tagging Programme (SSTP) fishing off the coast of South-west Scotland.

The anglers were fishing on-board a locally based charter boat, Onyer Marks, and in a remarkable 20 minute period, the two smoothhound, both of which would have beaten the current boat caught Scottish record were caught and safely returned.

The first fish fell to Steve Frayling of the Paisley based Silverlure Sea Angling Club, it weighed a very impressive 10lb 4 oz and was his first ever smoothhound; just a few minutes later "Fish on" came the cry and Guy Stewart, who has spent many hours fishing for the species, landed the biggest smoothhound ever seen in Scottish waters - weighing in at a fantastic 15lb 1oz.

An excited Guy said "The water so clear I could tell it was a big fish when it was twenty foot down. This fish was beyond my wildest dreams and nearly double the size of my previous best.

The skipper of Onyer Marks, Ian Burrett, who is also the Projects Director for the SSTP, was equally excited saying : "These fish are relative newcomers to our waters, their northern migration route is increasing possibly due to an increase in water temperatures; these and a few other incoming species show the potential for South-west Scotland to develop as a broad based angling destination".

Although either fish would have qualified as a new Scottish boat caught record for the species, both anglers declined to submit their claim, quickly tagging and returning the fish.