New Stingray Genus Discovered In The Amazon; 'they Are Uncommon Fishes And Therefore Difficult To Obtain' 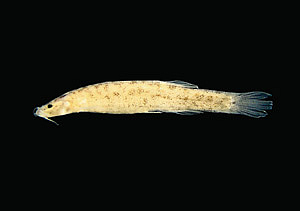 A new species of catfish -- Stenolicnus ix â was discovered in CuruÃ¡ creek, left tributary of the Amazon River in ParÃ¡, Brazil. Â© Wolmar B. Wosiac 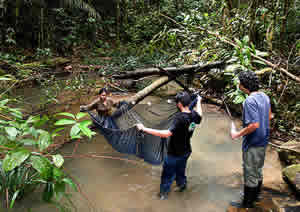 BELEM, Brazil -- A series of expeditions to explore the unknown biodiversity of the forests of the northern margin of the Amazon River in Brazil yielded a new species of catfish, researchers from Brazil announced today. Published in the journal Zootaxa in January, the discovery was made in a tributary of the Amazon River, in the northern state of ParÃ¡, at the heart of the world's largest block of protected rainforest, which covers four million hectares.

Named after the Mayan word "Ix", which is a term used to describe jaguars, the new fish, Stenolicnus ix, differs from other species of the same genus by the length of the nasal barbels, or the slender, whisker-like tactile organs extending from the mouth. The color pattern on the dorsal part of the trunk also distinguishes this new catfish, among other characteristics. It has a cream color background and a pattern of grouped dark patches scattered around its body, similar to jaguars.

The individual of Stenolicnus ix was collected with a sieve by scraping sand and leaf litter from the CuruÃ¡ River bed. Some fifteen species of fish were also observed in the same narrow and shallow waters, in an area about 5 meters wide and less than a meter deep. All other species of the same subfamily (Sarcoglanidinae) have been described based on one to three specimens only due to the limited access to the area where they are found â researchers reached the headwaters of the CuruÃ¡ River by helicopter. Also, the fact that the fish is tiny (only about 2 cm) and translucent makes it more difficult to be found.

"This fish was collected when we were about to finish our research in the creek. It is very small and, therefore, very hard to find. This is why we collected only a single individual," says Wolmar Wosiack, researcher and curator of the ichthyology collection of the Emilio Goeldi Museum, in the state of ParÃ¡, Brazil. The description was made by Wosiack with Luciano Montag, a professor at the Federal University of ParÃ¡, and Daniel Coutinho, student from the Graduate Program in Zoology of the Federal University of ParÃ¡. Wosiack, Montag and Coutinho are the authors of the article describing Stenolicmus ix.

The expeditions were organized by EmÃ­lio Goeldi Museum, Conservation International Brazil and the Environment Secretary of the State of ParÃ¡. Seven biological expeditions were held in 2008 with about 30 researchers who set out to explore an area of more than 12 million hectares and map out the biodiversity of this protected area -- previously unknown to science. The expeditions were led by Alexandre Aleixo, researcher and curator of the ornithological collection of the Museu Goeldi.

Patricia BaiÃ£o, Amazon Program director at Conservation International Brazil, said: "Discoveries like this one remind us that we still have a lot to learn about the biodiversity of the Amazon. Grao ParÃ¡ Ecological Station is the worldÂ´s biggest strictly protected area and holds important species, some unknown to science, and major ecosystems services. Only the protection of its limits and real implementation will achieve this area's purpose: the conservation of these native forests."