New Insights Into Helping Marine Species Cope With Climate Change; 'They Have To Adapt' 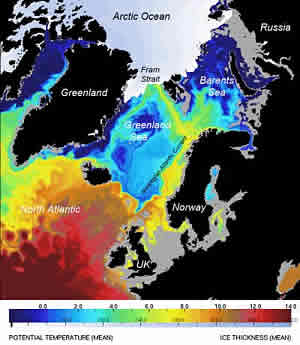 This image shows ocean temperature at the 100 m depth and sea ice thickness in Sept. 2006 from the 8 km resolution global model. Credit: NOCS

SOUTHAMPTON, England -- High-resolution computer simulations performed by scientists at the National Oceanography Centre, Southampton (NOCS) are helping to understand the inflow of North Atlantic water to the Arctic Ocean and how this influences ocean climate.

The summer of 2007 saw a record retreat in Arctic sea ice, and in general Arctic climate has become steadily warmer since the early 1990s. This has changed both sea ice drift and upper ocean circulation.

The warm North Atlantic water intrudes into the central Arctic Ocean through Fram Strait, the deep channel between Greenland and Spitsbergen that connects the Nordic Seas to the Arctic Ocean, contributing to sea ice melting.

"We need to understand what is going on because changes in the Arctic Ocean can influence climate around the world," said Dr Yevgeny Aksenov of NOCS: "The worry is that freshwater from melting ice and increased atmospheric precipitation in the Arctic could ultimately slow the overturning circulation of the North Atlantic, with serious consequences for global climate."

The researchers used a high-resolution computer model of ocean and sea ice, taking into account the shape of the seabed, and the affects of ice melting, snow and rainfall, solar radiation, and winds. The simulations were verified using long-term measurements of ocean currents and other key climatological and oceanographical data.

"Computers are now powerful enough to run multi-decadal global simulations at high resolution," said Dr Aksenov: "This helps to understand how the ocean is changing and to plan observational programmes so as to make measurements at sea more efficient."

Based on their simulations and available observations, they propose a new scheme for the inflow of North Atlantic water into the Arctic Ocean, involving three main routes.

A northern branch delivers water from the western Barents Sea, mixed to some extent with the Fram Strait branch. Here, North Atlantic water interacts with Arctic waters, resulting in fresh, cold water overlying saltier water below the mixed layer at a depth of around 50-170 metres.

The southern branch supplies the Arctic Ocean with warmer and more saline bottom water formed in the southeastern Barents Sea via full-depth convection and mixing.

Both the northern and southern branches of the Barents Sea flow deliver North Atlantic water to the Arctic Ocean via the 620 metre deep St Anna's Trough, located east of the Franz Josef archipelago in the far north of Russia. Together they transport around one and a half million cubic metres of water a second.

"Our research is leading to a physically based picture, our eventual goal being a comprehensive understanding of the mechanisms driving ocean climate change," said Dr Aksenov.