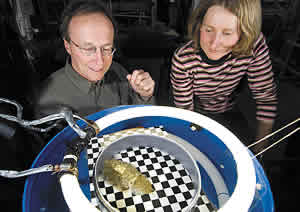 oger Hanlon and Lydia MÃ¤thger test the ability of a cuttlefish to adapt to a disruptive background pattern. Photo by T. Kleindinst. 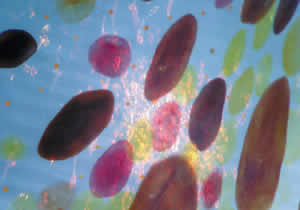 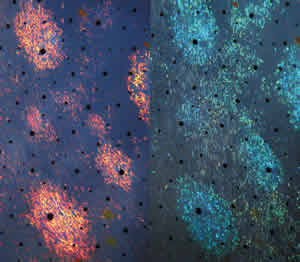 WOODS HOLE, Massachusetts -- Camouflage expert Roger Hanlon of the Marine Biological Laboratory (MBL) is co-recipient of a $6 million grant from the Office of Naval Research to study and ultimately emulate the exquisite ability of some marine animals to instantly change their skin color and pattern to blend into their environment.

Hanlon, who has spent more than three decades studying the camouflage artistry of squid, octopus, and cuttlefish (a class of animals known as the cephalopods), is collaborating with materials scientists and nanotechnologists at Rice University toward the goal of developing materials that can mimic cephalopod camouflage.

"Our internal name for this project is 'squid skin,' but it is really about fundamental research," says Naomi Halas, an expert in nano-optics at Rice University and the principal investigator on the four-year grant. "Our deliverable is knowledge, the basic discoveries that will allow us to make materials that are observant, adaptive, and responsive to their environment."

In 2008, Hanlon and MBL colleagues Lydia MÃ¤thger and Steven Roberts discovered that cephalopod skin contains opsins, the same type of light-sensing proteins that function in the eyes.

"This project will enable us to explore an exciting new avenue of vision research â distributed light sensing throughout the skin," Hanlon says. "How and where that visual information is used by the nervous system is likely to uncover some novel neural circuitry."

Hanlon and his team will perform experiments with cephalopods to determine how opsin molecules receive light and aid the animal's visual system in adjusting skin patterns for communication and camouflage. A wide range of techniques will be used to accomplish these aims. The MBL team, which includes scientists MÃ¤thger and Alan Kuzurian, will be collaborating with marine biologist Thomas Cronin of the University of Maryland, Baltimore County, on these investigations.

"This is inherently a multidisciplinary problem," Halas says. "What can we, as engineers, learn from the way these animals perceive light and color?" The project team's engineers will focus on emulating cephalopod skin using new metamaterialsâmaterials that blur the line between material and machine.