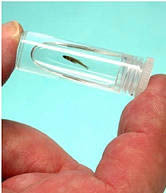 GLAND, Switzerland -- At least 52 new species of animals and plants have been identified this past year on the island of Borneo, according to scientists.

WWF says that these findings further highlight the need to conserve the habitat and species of the world’s third largest island.

“The more we look the more we find,” said Stuart Chapman, WWF International Coordinator of the Heart of Borneo Programme. “These discoveries reaffirm Borneo’s position as one of the most important centres of biodiversity in the world.”

Many of these creatures new to science are amazing: a miniature fish – the world’s second smallest vertebrate, measuring less than one centimetre in length and found in the highly acidic blackwater peat swamps of the island; six Siamese fighting fish, including one species with a beautiful iridescent blue-green marking; a catfish with protruding teeth and an adhesive belly which allows it to literally stick to rocks; and a tree frog with striking bright green eyes.

For plants, the ginger discoveries more than double the entire number of the Etlingera species found to date, and the tree flora of Borneo has been expanded by three new tree species of the genus Beilschmiedia.

Several of these new species were found in the “Heart of Borneo”, a 220,000km2 mountainous region covered with equatorial rainforest in the centre of the island. But WWF warns that this habitat continues to be threatened with large areas of forest being increasingly cleared for rubber, oil palm and pulp production. Since 1996, deforestation across Indonesia has increased to an average of 2 million hectares per year and today only half of Borneo's original forest cover remains, according to the global conservation organization.

“The remote and inaccessible forests in the Heart of Borneo are one of the world’s final frontiers for science and many new species continue to be discovered here. We are just waiting for the next surprise,” added Chapman. “But these forests are also vital because they are the source of most of the island’s major rivers, and act as a natural “fire-break” against the fires that have ravaged the lowlands this year.”

At a meeting of the UN Convention on Biological Diversity held last March in Curitiba, Brazil, the three Bornean governments – Brunei Darussalam, Indonesia and Malaysia – declared their commitment to support an initiative to conserve and sustainably manage the Heart of Borneo. It is now hoped that they will finalise a formal joint declaration as a matter of urgency to put the Heart of Borneo on the global stage of conservation priorities.