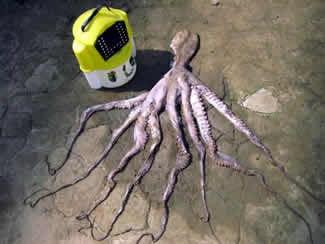 A fisherman pulled a 6-foot octopus out of the Ohio River while fishing at an Indiana State Park.

David Stepp was using a net when he found the creature on Monday. The octopus was dead. The fisherman was a little shaken.

"He thought it was a squid. He was pretty surprised," said Jeremy Beavin, a state aquarium specialist for the Falls of the Ohio State Park, where the catch was made.

Beavin said the octopus may have been purchased at a fresh fish market and dumped into the river in order to scare someone. Because it appeared to be a Pacific Coast octopus, it was unlikely to have been transported from the sea - which often occurs when strange creatures like sharks and snakes are pulled from Midwestern waterways.

Officials are not sure how it died.

"It's a salt water creature so it was not going to live long anyway," said Beavin. "It looked pretty fresh. There were no signs of any biting from other fish."

"My guess is it was probably put there deliberately. Someone could have gotten it at a Wal Mart."

In 1999, a smaller octopus was pulled out of the same river. And a few years ago, a South American crocodile was found (alive) in the river.