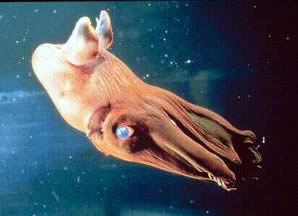 WASHINGTON, D.C. -- New evidence that chemical contaminants are finding their way into the deep-sea food web has been found in deep-sea squids and octopods, including the strange-looking "vampire squid". These species are food for deep-diving toothed whales and other predators.

In a study to be published in the journal Marine Pollution Bulletin, Michael Vecchione of NOAA Fisheries' National Systematics Laboratory and colleagues Michael Unger, Ellen Harvey and George Vadas at the Virginia Institute of Marine Science of The College of William and Mary report finding a variety of chemical contaminants in nine species of cephalopods, a class of organisms that includes octopods, squids, cuttlefishes and nautiluses.

"It was surprising to find measurable and sometimes high amounts of toxic pollutants in such a deep and remote environment," Vecchione said. Among the chemicals detected were tributyltin (TBT), polychlorinated biphenyls (PCBs), brominated diphenyl ethers (BDEs), and dichlorodiphenyl-trichloroethane (DDT). They are known as persistent organic pollutants (POPs) because they don't degrade and persist in the environment for a very long time.

Recent studies have reported the accumulation of POPs in the blubber and tissues of whales and other predatory marine mammals as well as in some deep-sea fish. Other investigators had speculated that the pollutants in marine mammals had resulted from feeding on contaminated squids. However, almost no information existed prior to this study about POPs in deep-sea cephalopods. Vecchione and colleagues wanted to see if whales had a unique capacity to accumulate pollutants or if they were simply one of the top predators in a contaminated deep-sea food web.

The researchers collected nine species of cephalopods from depths between 1,000 and 2,000 meters (about 3,300 to 6,600 feet) in 2003 in the western North Atlantic Ocean using a large mid-water trawl. Species were selected for chemical analysis based on their importance as prey and included the commercially important short-finned squid Illex illecebrosus, as well as cockatoo squid, "vampire squid", and the large jelly-like octopus Haliphron atlanticus.

Twenty-two specimens were analyzed for a variety of contaminants. One of the chemical pollutants, TBT, is an additive used to control growth of organisms and is found in antifouling paints for boats, wood preservatives, and many other products. TBT is an endocrine disrupting compound and has been detected in whales and dolphins. It has been regulated worldwide since the late 1980s, but has been a concern because of its extreme toxicity to marine invertebrates in the coastal environment.

Other chemical contaminants found in the specimens include polycyclic aromatic hydrocarbons (PAHs), found in all the samples, diphenyl ether (DPE), polychlorinated biphenyls (PCBs), and brominated diphenyl ethers (BDEs). The researchers also detected DDT, a pesticide banned in the U.S. in the 1970s but still used on a limited basis in some parts of the world to control diseases like malaria.

PCBs are a class of human-produced compounds used to insulate electrical transformers and capacitors and in coatings, sealants, adhesives, paints, wood floor finishes, and even in carbonless copy paper. PCB production was banned in the U.S. in the 1970s. BDEs have been used as flame retardants in a variety of household products, from plastics to foam in furniture and fabrics.

"The cephalopod species we analyzed span a wide range of sizes and represent an important component of the oceanic food web," Vecchione said. "The fact that we detected a variety of pollutants in specimens collected from more than 3,000 feet deep is evidence that human-produced chemicals are reaching remote areas of the open ocean, accumulating in prey species, and therefore available to higher levels of marine life. Contamination of the deep-sea food web is happening, and it is a real concern."