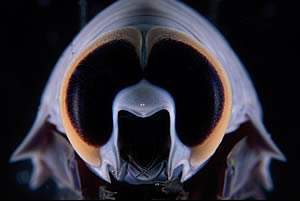 ST. LUCIA, Queensland -- Scientists from the Queensland Brain Institute have used high-tech equipment to capture underwater creatures at depths not documented from before.

The team, led by Professor Justin Marshall, captured the sea creatures using special low-light sensitive, custom-designed remote controlled cameras, which sat on the sea floor. The Australian Research Council funded the equipment that was built at The Harbour Branch Oceanographic Institute in Florida.

"Osprey Reef is one of the many reefs in the Coral Sea Conservation Zone, which has been identified as an area of high conservation importance by the Federal Government. Therefore, it is paramount that we identify the ecosystems and species inhabiting the area," Professor Marshall said.

"As well as understanding life at the surface, we need to plunge off the walls of Osprey to describe the deep-sea life that lives down to 2000m, beyond the reach of sunlight. We simply do not know what life is down there and our cameras can now record the behavior and life in Australia's largest biosphere, the deep-sea."

Scientists working on the Deep Australia project also collected amazing footage of the Nautilus, a relative of squid or octopus that still lives in a shell as they have done for millions of years.

Researchers measured these "living fossils" to find out more about their biology before returning them to sea.

Professor Marshall explained most of our knowledge on how nerve cells function and communicate was first pioneered through work on squid giant nerve cells.

"We are now returning to these original model systems, both for their own intrinsic interest and also to better understand brain disorders which lead to conditions such as epilepsy," he said.

In September the scientists will travel to the Peruvian Trench off South America where they will film and capture deep-sea species 2,000m below sea level. One creature they hope to encounter is the Giant Squid, possessor of the world's largest nerve cell.

"This technology will help the discovery of deep-sea creatures' adaptations to the challenges of living at crushing depths and in freezing and dark water. Here they must find food and mates in the dark and avoid being eaten themselves. We are interested in the sensory systems used for this lifestyle," she said.