NOAA Scientists Conduct Shark Survey Off US East Coast; 'We Still Have A Lot To Learn'

NOAA And Partners To Survey Marine Life At USS Monitor Wreck Site; Collaboration 'A Great Story In Itself'

Florida Marine Lab Tags Two Whale Sharks; 'Unusual To Be Able To Tag Them Here Off The Florida Coast' 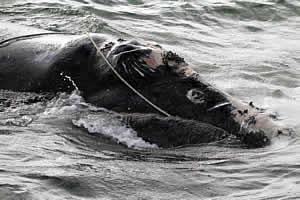 Closeup of a North Atlantic right whale assisted in disentangling on Dec. 30, 2010, off the coast of Daytona, Fla. Credit FWC

DAYTONA, Florida -- A team of state and federal biologists assisted a severely entangled North Atlantic right whale off the coast of Daytona, Fla., yesterday. The team successfully removed more than 150 feet of ropes wrapped around the whale's head and fins, and cut portions of entangling ropes that remain on the animal.

"We were very concerned about this whale as the entangling ropes appeared to be life threatening," said Jamison Smith, Atlantic Large Whale Disentanglement Coordinator for NOAA's Fisheries Service. "However, given the efforts of the disentanglement team we are optimistic the whale may shed the remaining ropes on its own, so we will continue to monitor its condition via aerial surveys and intervene again if necessary."

A team from the Florida Fish and Wildlife Conservation Commission first sighted the entangled whale on Christmas Day, during routine aerial surveys designed to spot right whales in their only known calving, or birthing, grounds off Georgia and northeast Florida. These aerial survey teams alert mariners to the presence of right whales, enabling ships to alter their course to avoid potential collisions with the animals.

This particular animal is a young whale estimated to be approximately 30 feet long and was born during the 2008-2009 calving season. Prior to this recent entanglement, it was last observed gear free by aerial survey teams off Florida's northeast coast in February 2010.

Immediately after spotting the whale on Christmas Day, an FWC team of scientists responded to the whale to further assess the severity of the entanglement and the physical condition of the whale. While on scene, the team was able to attach a satellite tracking buoy to the trailing lines.

Disentangling a right whale takes a great deal of planning, expertise, and coordination among agencies. Because of the speeds at which the animals move and distances they travel, it sometimes takes days or even weeks under ideal weather and oceanographic conditions to safely and successfully free an entangled whale.

Right whales spend their summers feeding off the New England and Canadian coasts, then travel to the southeast waters to give birth to their calves from mid-November through mid-April. Scientists typically document one or two entangled right whale cases in the southeast each year.

Fishing gear removed from whales in previous southeast cases originated from locations as far away as New England and Canada. Fishing gear removed from the whale yesterday included ropes and wire mesh material, similar to what is found in the trap or pot fisheries for fish, crab and lobster along the mid-Atlantic, northeast U.S., and Canadian coasts. However, the specific fishery and its geographic origin are pending examination by experts at NOAA's Fisheries Service.