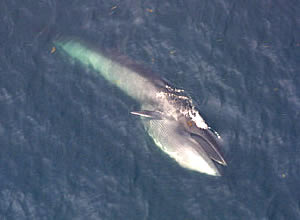 The Santa Monica sushi bar The Hump has been charged with selling sushi made from endangered sei whales (pictured). credit NOAA Fisheries

Sei whales are listed as an endangered species, and the sale of all whale meat is prohibited in the United States by the Marine Mammal Protection Act.

The criminal complaint charges Typhoon Restaurant, Inc. -- the parent company of The Hump restaurant, which is located at the Santa Monica Airport -- and Kiyoshiro Yamamoto, a 45-year-old chef who resides in Culver City. Both defendants are charged with the illegal sale of a marine mammal product for an unauthorized purpose.

"Someone should not be able to walk into a restaurant and order a plate of an endangered species," said U.S. Attorney Andre Birotte Jr. "Federal law has a variety of provisions, including criminal statutes, intended to protect this planet's threatened natural resources. People should be aware that we will use these criminal statutes where appropriate to protect endangered species, including to ensure that they do not end up part of a meal."

According to the criminal complaint and a search warrant that was executed at the restaurant last Friday evening, The Hump sold whale sushi to customers on three occasions dating back to October. The meat sold as "whale" on two of the occasions was examined by scientists, who tested the DNA of the meat and determined it was Sei whale. Additionally, receipts given to customers at The Hump indicated that they had purchased "whale."

It is illegal to sell any kind of whale meat in the United States. Sei whales are protected under the Marine Mammal Protection Act of 1972 and they are listed as endangered in Endangered Species Act of 1973.

The investigation into The Hump and Yamamoto was conducted by the National Oceanic and Atmospheric Administration, Office of Law Enforcement. NOAA investigators received assistance from the United States Fish and Wildlife Service, the California Department of Fish & Game, and U.S. Customs and Border Protection.

"Making illicit products like whale meat available on the market only encourages the illegal hunting of marine mammals such as the Sei whale -- a species that is already threatened by extinction," said Martina Sagapolu, Acting Special Agent in Charge for the NOAA Office of Law Enforcement, Southwest Division. "While there is a market for illegal products and delicacies, we are dedicated to finding and prosecuting those who would exploit protected resources that are under threat."

A criminal complaint contains allegations that a defendant has committed a crime. Every defendant is presumed innocent until and unless proven guilty.

The Hump's parent company, Typhoon Restaurant, Inc., and Yamamoto are each charged with illegally selling a marine mammal product. This charge is a misdemeanor offense that carries a maximum statutory penalty of one year in federal prison and a maximum fine of $100,000 for an individual and $200,000 for an organization.

Yamamoto and representatives of The Hump will be summoned to make initial court appearances in U.S. District Court in the coming weeks.

The investigation into The Hump was started after members of the general public brought information to NOAA. Anyone with information about the illegal sale of marine mammals is encouraged to call the NOAA Law Enforcement hotline at (800) 853-1964.