Study: Recovery Of Fish Populations From Overfishing Can Take Decades; 'Up To 37 Years'

Research: Next 100 Years Will Present 'Major Challenges' To Ocean Wildlife Populations; 'Our Tackle Box Has Industrialized'

A deep-sea grenadier, or "rattail" 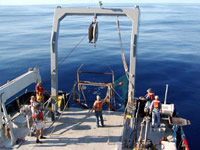 Scientists prepare to launch a "sled" used for investigating the deep-sea environment.

SAN DIEGO, California -- The largest habitats on Earth are located in the vast, dark plains at the bottom of the ocean. Yet because of their remoteness, many aspects of this mostly unexplored world remain mysterious.

New research led by Scripps Institution of Oceanography at the University of California, San Diego, has produced a rare insight into animal populations in the deep sea.

In first-of-its-kind research published in the March issue of the journal Ecology, David Bailey, Henry Ruhl and Ken Smith of Scripps analyzed fish and other marine animals over a 15-year period in the deep sea of the eastern North Pacific Ocean. At the site, the source of one of the longest time-series studies of any abyssal area in the world, the scientists found a threefold increase in fish abundance, an upsurge that appears to have been driven by an increase in the food available to the animals.

Bailey says the study is a unique glimpse into fish populations undisturbed by human influence.

"This is a rare study of a large marine fish population that doesn't get commercially fished," said Bailey. "Other fish populations have their abundances, body sizes and life histories altered by fisheries activities, so our study probably gives us some information about how fish communities work when they are not driven by human exploitation."

The Ecology study follows research published in 2004 by Ruhl and Smith that showed that significant changes in the deep-sea environment were likely driven by changes at the surface of the ocean by El NiÃ±o and La NiÃ±a events.

Such oceanographic events, along with longer-term shifting called the Pacific Decadal Oscillation, can bring more nutrients to surface waters. While animals near the surface can rapidly benefit, it can be months to years later for changes to extend to the ocean bottom, leading to a proliferation of bottom-dwelling invertebrate animals that make up some part of the food supply of deep-sea fishes.

This appears to have been the case from 1989 to 2004, when the researchers found a nearly three-fold increase in deep-sea fish called grenadiers, animals related to cod that are also known as "rattails." Species included Coryphaenoides armatus, or abyssal grenadier, an animal found worldwide at depths of 2,000 meters and greater, and Coryphaenoides yaquinae, a fish of which little is known and that is found only in the deep North Pacific.

Grenadiers eat a range of foods, from the dead bodies of fish and whales to invertebrates such as worms and crustaceans. The most commonly observed animals on the seafloor include sea cucumbers, sea urchins and brittle stars, and these appeared to form part of the grenadiers' diet. The researchers used the abundances of these animals as an indicator of food supply to the fish. Large changes in the abundances of these animals were followed by changes in the numbers of fish, with both groups increasing in number over the 15-year study.

The researchers say their results indicate that animals in the deep sea live in an environment in which food supply drives population levels, called a "bottom-up control," rather than a "top-down control" situation in which predator pressure controls prey abundances.

"The predominant trend had been that people thought that fish have a powerful effect on their environment, and they drive the changes in everything else," said Bailey, a postdoctoral researcher at Scripps and lead author of the study. "What we've seen is the reverse, that fish are responding to a change in their habitat. We think that a lot of fish communities are fundamentally changed by fishing. Our study is really nice in that we are working on populations that have never been fished, so their population dynamics can be seen being driven by natural processes."

Comparing these observations to those for shallow water, the researchers speculate that deep-ocean and shallow-water fish communities' work differently. A possible reason is that the deep ocean is dependent for its food on material falling from the communities nearer the sea surface; this food supply is smaller and less predictable than that available to most shallow-water fish. The effects of this difference on the dynamics of fish communities are not known, and are being explored using mathematical models as the investigators move forward with this project.