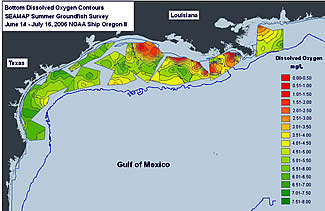 WASHINGTON, D.C. -- NOAA awarded the first year of funding for multi-year grants totaling $2,259,872 that will support research into the causes and impacts of the hypoxic zone in the northern Gulf of Mexico known as the Dead Zone. These projects are funded by the NOAA Northern Gulf of Mexico Ecosystems and Hypoxia Assessment, or NGOMEX, Program.

"Mitigation of the Gulf hypoxia problem requires a coordinated ecosystem approach to management that includes the entire watershed from its beginning all the way to the coast," said retired Navy Vice Adm. Conrad C. Lautenbacher, Ph.D., undersecretary of commerce for oceans and atmosphere and NOAA administrator. "Through the northern Gulf of Mexico program, NOAA is upholding its longstanding commitment to supply leading-edge scientific information to the management approach being pursued by federal and state agencies through the Mississippi River/Gulf of Mexico Watershed Nutrient Task Force."

Hypoxia-low dissolved oxygen-occurs in many parts of the world's aquatic environments. Hypoxic and anoxic (no oxygen) waters have existed through geologic time, but the frequency of their occurrence in shallow coastal and estuarine areas worldwide is increasing. The largest zone of oxygen-depleted coastal waters in the United States, and the second largest for the world's coastal ocean, is in the northern Gulf of Mexico on the Louisiana continental shelf.

Although NGOMEX-funded research has already produced valuable information regarding the impacts of Gulf hypoxia on natural resources, many questions remain. Two of the new research efforts will support the development of quantitative models to determine the effects of the hypoxic zone on ecologically and commercially important aquatic species, and assess the potential benefits that the mitigation of hypoxia would have on these resources.

The first project is a $491,359 collaborative study involving the NOAA Great Lakes Environmental Research Laboratory, University of Maryland Center for Environmental Studies, University of Akron and Florida International University to support development of a food web model to predict the effects of hypoxic zone size on populations of pelagic fish. In support of the second study, $445,281 has been awarded to University of Texas at Austin to determine the impacts of hypoxic zone on economically and ecologically important aquatic populations, such as Atlantic croaker and benthic copepod. Both projects aim to determine to what extent the Gulf's Dead Zone is impacting species habitat and health, and the economic and ecological benefits of reducing hypoxia.

The Louisiana Universities Marine Consortium has been awarded $696,872 to extend its long-term monitoring program that provides the data for determining Gulf hypoxic zone spatial and temporal dynamics; information that is vital to the development of improved predictive models that will lead to better understanding and strategies related to nutrient management scenarios within the Mississippi River basin.

Texas A&M University was awarded $410,401 to include state-of-the-art observing systems that will provide continuous measurements of physical, chemical and biological properties at selected locations in the Dead Zone. These measurements are necessary to improve predictions of the hypoxic zone based upon improved understanding of the complex underlying mechanisms developed under previous NGOMEX-supported research. The ability to make these predictions is the underpinning to future management decisions occurring in the Mississippi River basin to alleviate the hypoxic conditions.

The NGOMEX Program also provided funding of $215,959 to the Coastal Ecology Institute at Louisiana State University to examine several oxygen and carbon cycling pathways in hypoxic bottom waters. This research will contribute to improving the accuracy of hypoxia models for the northern Gulf of Mexico, which will ultimately improve managers' ability to make informed decisions on Mississippi River watershed nutrient management strategies.

The NGOMEX Program, managed by the NOAA Center for Sponsored Coastal Ocean Research, seeks to provide resource managers with new tools, techniques and information to make informed decisions, and assess alternative management strategies regarding hypoxia. Supported projects include the development of a fundamental understanding of the northern Gulf of Mexico ecosystem, with a focus on the causes and effects of the hypoxic zone, and the prediction of its future extent and impacts on ecologically and commercially important living resources.

The projects will continue NOAA's decade-long focus on coastal hypoxia. Through the NGOMEX Program, predictive models have been developed to forecast the spatial and temporal extent of the hypoxic zone given varying human-induced or natural factors that cause hypoxia. These new grants will improve and validate these forecast models by extending long-term monitoring efforts, and incorporating processes important to understanding the link between environmental factors, hypoxia and ecosystem health.