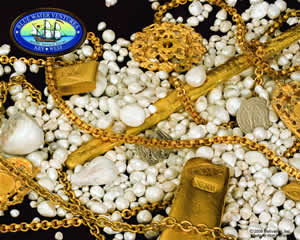 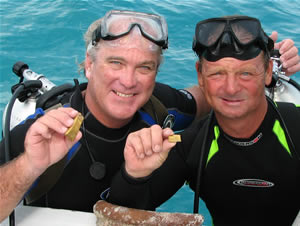 KEY WEST, Florida -- "Gold is most excellent," 15th century explorer Christopher Columbus penned in his sea journal, along with "of gold there is formed treasureâ¦". Columbus also compared the taste of iguana to chicken.

In some ways, life has not changed much in the five centuries that separate his quests from those of modern adventurers. It is still common to compare the taste of almost everything to chicken, and gold is still considered "most excellent."

In a courtroom last week in Key West, Columbus's wisdom of the ages was once again vindicated. Spectators were enthralled as riches recovered from the 1622 Fleet Spanish galleon Santa Margarita went on display. The "formed treasures", laid out on a six-foot long table, amounted to a fortune in "most excellent" gold chains, bars and ornaments, ancient silver coins and thousands of pearls.

The scene had Judge James Lawrence King, senior Federal Judge in the U.S. District Court for the Southern District of Florida, presiding over the adjudication of artifacts recovered by the historic shipwreck search and recovery group, Blue Water Ventures Key West.

Appointed to his current position in 1970, the view from the bench Monday was not completely unique for the distinguished judge, whose historic 1982 decision awarded the first significant find from the same historic shipwreck to the late Mel Fisher's company, Treasure Salvors, Inc. Judge King has presided over an annual adjudication procedure for the ship's treasure recovery for more than two decades now. Referring to salvage efforts throughout that time, the judge touched on years that were bountiful and those that were less so, remarking simply, "that's life, and that's the way it is."

Because the Santa Margarita was battered and destroyed in a hurricane, its cargo was distributed over an extensive area and now lies scattered and hidden. Ripping currents and deep, rapidly shifting sands offer particular challenges to those who seek her cargo.

Since the 1980's, several groups have tried their skill at locating the still substantial remains of the galleon, but none with as much success as the current operation, Blue Water Ventures Key West, founded by W. Keith Webb. Webb, who comes from a dynamic corporate background, orchestrated a joint venture partnership, undertook to secure the most up-to-date technology, and recruited a veritable whose-who of shipwreck research, search and recovery, including project partner marine archaeologist Dr. R. Duncan Mathewson III and historian Dr. Eugene Lyon, both of Nuestra Senora de Atocha fame, as well as Dan Porter, a salvage expert of several decades experience.

This combination of technology, experience, knowledge and persistence seems to be the charm, as this was the season that the Santa Margarita gave up a new and totally unexpected treasure -- over 16,000 natural pearls contained in a single, simple oval leaden box. The largest, at over 52 carats, is one of the largest known natural pearls in the world.

Following an examination of the artifacts on display, and a description by the recovery team of coming season's salvage plan, the motion of adjudication of articles of salvage was approved by Judge King, finalizing the previous year's efforts.

As the hearing concluded, and the pearls and gold and silver treasures were stowed in a non-descript container for inconspicuous transport, members of the team paid their respects to the judge and assured him it was their intention to fill every table in the room with treasure and artifacts at the next adjudication.