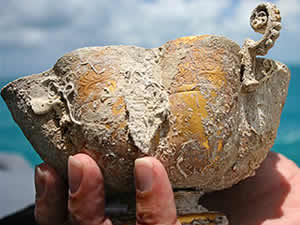 The ornately etched vessel, which the Spanish called a bernegal, was discovered in about eighteen feet of seawater. credit BWVKW

The ornately etched vessel, which the Spanish called a bernegal, was discovered in about eighteen feet of seawater and one foot of sand by the team's newest member, 20 year old Mike DeMar, whose last name means "of the sea." DeMar, who moved to Key West from Seattle, Washington, just four months ago, said that searching for lost shipwrecks and their treasures had been his dream since childhood and "today it just got sweeter."

For the past three years, BWVKW, a joint venture partner of Mel Fisher's Treasures, has been searching an area near the Marqueses Keys, where the 480 ton galleon Santa Margarita is known to have been destroyed in a fierce storm, taking down with her 143 passengers and crew and a fortune in treasures. With more than 30 years of historic shipwreck search and recovery experience behind him, Operations Chief Dan Porter, captain of the companies search and salvage vessel Blue Water Rose, took the helm in 2007 and has identified and led the team along a new artifact trail into previously unexplored areas.

"What a spectacular discovery," said Blue Water Ventures Key West President/CEO W. Keith Webb, "not only because of the astounding beauty and rarity of the artifact, but also because the area of exploration that produced it - the northern-most that gold has ever been found - has given our team every reason to expect a very adventurous summer."