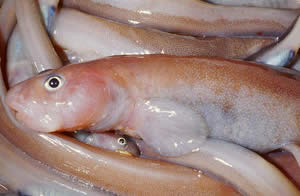 BARCELONA, Spain -- The new species of Antarctic fish, Gosztonyia antarctica, has been discovered at a depth of 650 metres in the Bellingshausen Sea in the Antarctic Ocean, an area which has not been studied since 1904 and where the fauna is 'completely' unknown. Jesus Matallanas, the Spanish researcher responsible for the find, collected four specimens of the new species during Spanish Institute of Oceanography (IEO) campaigns in the southern hemisphere summers of 2003 and 2006.

The study of the biodiversity of the Bellingshausen Sea has been systematically ignored by international projects because it is quite inaccessible and its beds are not mapped,' SINC was told by Jesus Matallanas, the study's main author and researcher from the Autonomous University of Barcelona (UAB).

The work, which appears in the latest issue of the journal Polar Biology, is based on the IEO's Bentart-03 and Bentart-06 campaigns, in which Matallanas participated as an expert in taxonomy of Antarctic fish.

It is a taxonomic study of these zoarcidae specimens (groups of dominant fish on the continental slope of northern seas which make up around 240 species) captured in the Bellingshausen Sea.

'One of the most significant results is that the ichthyofauna of the Bellingshausen Sea, contrary to what was previously believed, is more closely related to that of the Eastern Antarctic than the Western,' highlighted the researcher.

Another important discovery is that in contrast to what occurs in other seas in the Antarctic Ocean, in the Bellingshausen Sea zoarcidae are the dominant group of fish below a depth of 550 metres,' added the zoologist.

Before confirming the discovery of a new species, in this case Gosztonyia antarctica, which belongs to a group with a very wide distribution, the researcher carried out a worldwide review of all articles published to date.

The new species belongs to an also new genus, which is similar to various Patagonian genera, and its name Gosztonyia, is in recognition of Atila Esteban Gosztonyi, a great expert in the systematics of zoarcidae who has described various new genera endemic to the Magallanes region. The specific name, antarctica, refers to the place of capture of the species: the Antarctic region.

The specimens captured measure between 25.4 cm and 30 cm, are anguilliformes and 'the skulls has a lot of its own exclusive anatomical characters,' commented the scientist. All the specimens are preserved in 70% alcohol at the UAB.

Since the expedition of the boat Belgica, which obtained two unique specimens of fish in 1904, no one has fished in this sea, although its fauna has been included 'without any justification' in the Western Antarctic.