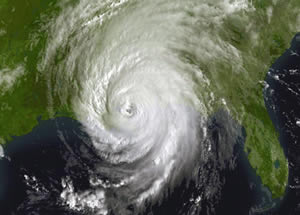 WASHINGTON, D.C. -- A warming global ocean — influencing the winds that shear off the tops of developing storms — could mean fewer Atlantic hurricanes striking the United States according to new findings by NOAA climate scientists. Furthermore, the relative warming role of the Pacific, Indian and Atlantic oceans is important for determining Atlantic hurricane activity.

The article, to be published on January 23 in Geophysical Research Letters, uses observations to show that warming of global sea surface temperatures is associated with a secular, or sustained long-term increase, of vertical wind shear in the main development region for Atlantic hurricanes. The increased vertical wind shear coincides with a downward trend in U.S. landfalling hurricanes.

“We looked at U.S. landfalling hurricanes because it is the most reliable Atlantic hurricane measurement over the long term,” says Chunzai Wang, a physical oceanographer and climate scientist with NOAA’s Atlantic Oceanographic and Meteorological Laboratory in Miami and lead author on the article. “Using data extending back to the middle nineteenth century, we found a gentle decrease in the trend of U.S. landfalling hurricanes when the global ocean is warmed up. This trend coincides with an increase in vertical wind shear over the tropical North Atlantic and the Gulf of Mexico, which could result in fewer U.S. landfalling hurricanes.” For the article, Wang worked with Sang-Ki Lee of the Cooperative Institute for Marine and Atmospheric Studies-University of Miami.

In terms of hurricane strength, Wang notes, “The vertical wind shear is not the only factor affecting Atlantic hurricane activity, although it is an important one.” Other factors include atmospheric humidity, sea level pressure, and sea surface temperature.

This study also suggests that where the global ocean warming occurs is important for determining the vertical wind shear in the Atlantic hurricane main development region — within the 10Â°-20Â° North latitude belt that stretches from west Africa to Central America. Whether future global warming increases Atlantic hurricane activity will probably depend on the relative role induced by sustained long-term warming over the tropical oceans.