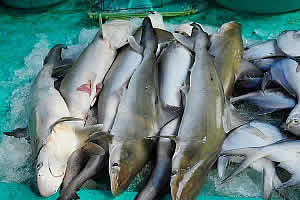 PERTH, Western Australia -- A Murdoch University PhD student will spend a year living among Indonesian shark fishermen to investigate their impact on shark populations and the effects of conservation efforts on fishing communities.

Vanessa Jaiteh hopes her project, beginning at the end of this week through Murdoch's Asia Research Centre and Centre for Fish, Fisheries and Aquatic Ecosystems, will contribute to future sustainability of declining fish stocks in Indonesia that support thousands of villagers living in poverty.

"I'm trying to identify trade-offs between shark management initiatives and their impact on the livelihood, security, and economic welfare of remote shark fishing communities," she says.

Once she has a feel for how they live she will conduct structured interviews and focus group discussions.

Ms Jaiteh will also assess shark numbers and sizes from fixed camera footage and onboard observations of captured sharks to gain some of the first significant data on Indonesian shark populations and uncover the effectiveness of conservation areas and how much fishing pressure it can sustain.

While Indonesia is the world's largest harvester of shark fin, the industry remains largely unregulated with no legal framework beyond a 2006 national action plan of only a few pages that are not based on scientific findings.

However, Ms Jaiteh says marine management efforts "are often based on biological data alone, and therefore do not take into account the livelihood requirements of local fishers as stakeholders".

"If fishers are not considered in management decisions, the result could be illegal fishing or greater poverty among fishing communities," she says.

Ms Jaiteh says a potential way to improve the situation would be to get villagers out of shark fishing and into aquaculture, especially as Indonesia wants to double its fishing productivity by 2014.

Ms Jaiteh's research is made possible by the Prime Minister's Australia Asia Outgoing Postgraduate Award, which provides financial support for Australian postgraduate students to do research in Asia that works towards strengthening the relationships between Australia and Asian countries.