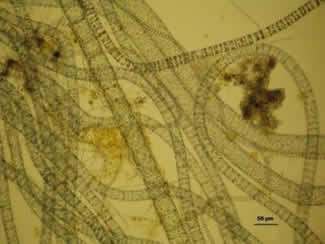 Thioploca was found in seven of eight samples drawn but at very low concentrations.

A startling revelation about the number of different kinds of bacteria in the deep-sea raises fundamental new questions about microbial life and evolution in the oceans.

In a paper published in the USA by the Proceedings of the National Academy of Sciences journal (July 31, online early edition), scientists reveal marine microbial diversity may be some 10 to 100 times more than expected, and the vast majority are previously unknown, low-abundance organisms theorized to play an important role in the marine environment as part of a "rare biosphere."

"Just as scientists have discovered through ever more powerful telescopes that stars number in the billions, we are learning through DNA technologies that the number of marine organisms invisible to the eye exceeds all expectations and their diversity is much greater than we could have imagined."

"Microbiologists have formally described 5,000 microbial 'species'," he says. "This study shows we have barely scratched the surface. Over the last 10 to 20 years, molecular studies have shown there to be more than 500,000 kinds of micro organisms. In our new study, we discovered more than 20,000 in a single liter (about one quart) of seawater, having expected just 1,000 to 3,000."

"The number of different kinds of bacteria in the oceans could eclipse five to 10 million," he added.

Dr. Sogin and seven co-authors - Hilary G. Morrison, Julie A. Huber, David Mark Welch, Susan M. Huse and Phillip R. Neal of the MBL, Jesus M. Arrieta of the Instituto MediterrÃ¡neo de Estudios Avanzados, Spain, and Gerhard J. Herndl of the Royal Netherlands Institute for Sea Research – made their discovery using a revolutionary new DNA technique, "454 tag sequencing," that requires only small snippets of genetic code to identify an organism. They produced as many as 25,000 short DNA sequences for microscopic organisms in each sample from depths of 550 to 4,100 meters (roughly 1,800 to 13,500 feet) at eight Atlantic and Pacific sites. The sampling locations included a hydrothermal vent on an underwater Pacific volcano 480 km (300 miles) off the coast of Oregon, as well as several North Atlantic sites between Greenland and Ireland.

The most unusual sequence tags come from organisms present in low abundance, and these bacteria make up the 'rare biosphere'. "The detection of these previously overlooked microbes opens a world of new questions about their role in ecological processes and their evolutionary history," says Dr. Sogin.

The study forms part of the International Census of Marine Microbes (ICoMM), a project of the Census of Marine Life, a 10-year global initiative started in year 2000 that now involves more than 1,700 researchers in over 70 countries in efforts to assess and explain the diversity, distribution, and abundance of life in the oceans -- past, present, and future.

"ICoMM has brought together some of the top microbial oceanographers and evolutionary biologists in the world," says MBL Director Gary G. Borisy. "This discovery by Dr. Sogin and his colleagues demonstrates the value of a collaborative and innovative approach to understanding microscopic life in our oceans."

"Microbes constitute the vast majority of marine biomass and are the primary engines of Earth's biosphere," says Dr. Sogin. "They are the oldest life forms, the primary catalysts of energy transformation, and fundamental to the biogeochemical cycles that shape our planetary atmosphere and environment.

"From an evolutionary perspective, they are of pivotal importance. They were the only kinds of life on Earth for approximately 80% of the planet's history. All multi-cellular life depends upon microbial processes. The microbes can live without us but we are totally dependent upon them for our continued survival.

"Exploration of this newly discovered 'rare biosphere' could become a major field of marine biology."

Says Dr. Sogin: "We know we're going through global change and micro organisms are vital to our survival. What we do not know is the role of low-abundance microbial populations that have persisted over large evolutionary time scales. We need to understand their diversity and how they work, to anticipate which species can be expected to adapt and how quickly, and to grasp how such other forces as competition and resource availability drive evolutionary change."

While a small number of different kinds of bacteria dominated all samples studied, thousands of low-abundance populations represented an overwhelming majority of the novel diversity. Dr. Sogin says: "The most intriguing immediate questions are: How and why do these many different populations of low abundance organisms exist at all; why are they still here?"

"It's possible these rare organisms are present in high numbers at some locations and their low abundance at other sites is a consequence of diffusion and dispersal. However we believe they must have some importance to the marine ecosystem and can theorize a couple of possible roles."

One is that they are keystone life forms – micro organisms that exist in low numbers but have some important function within the community, producing perhaps some essential compound.

Alternatively, these rare, low-abundance organisms, which are less prone to predation and direct competition with dominant species, may exist throughout the oceans. If environmental change precludes the growth of dominant populations, members of the rare biosphere may take on new importance in ecosystem processes.

"In other words, the low-abundance organisms might not be very active but represent a reserve of genetic and genomic innovation," says Dr. Sogin.

"Imagine a world of car manufacturers comprised of giants like Toyota, Ford and Mercedes but with 20,000 other firms making a few vehicles each," says Jesse Ausubel of New York City, the Census of Marine Life Program Director at the Alfred P. Sloan Foundation. "That is how it seems the mysterious microbial world operates. A swimmer taking just a swallow of seawater may be consuming an entire zoo of 1,000 different forms of bacteria!"

Says co-author Julie Huber of the MBL: "We cannot know the implications of a major, long-term environmental shift if we do not know what species were there to start with. What is rare in one environment may prevail in another. And if major environmental changes do occur, these low-abundance microbes may become dominant."

"The depth of sampling conducted is orders of magnitude greater than previously available and reveals the enormous range of genetic diversity of different microbes in the ocean," she says.

Says co-author Gerhard Herndl of the Netherlands: "Once we catalog the diversity of microbial life in the sea, we can look for patterns and trends in the distribution of organisms. Then we will be able to address how quickly the microbial community can adapt to environmental shifts and what drives evolutionary change."

The MBL, as part of the ICoMM collaboration, has secured $1.5 million in funding from the W.M. Keck Foundation to analyze our next samples at 1,200 marine sites," says ICOMM co-chair Jan de Leeuw of the Netherlands. "We will sample surface and mid waters, hydrothermal vents, water near methane seeping from the sea floor, and deep sea sediments. While 1,200 one-liter samples is a drop in the bucket considering the size of the oceans, it represents an important start."

"Peering through a laboratory microscope into a drop of seawater is like looking at the stars on a clear night", says marine microbiologist Victor Gallardo of Chile, Vice Chair of the Census of Marine Life. "The '454 tag sequencing' strategy increases resolution like the Hubble Telescope. We can see marine microbial diversity to which we were blind before. These rare, ancient organisms are likely to prove a key part of nature's history and strategy."