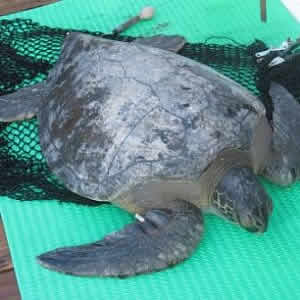 SAN JOSÃ©, Costa Rica -- During the latest expedition to Cocos Island by the Costa Rican organization PRETOMA and their US based partner TIRN on September 21-27, three Pacific green turtles (Chelonia mydas) were tagged with satellite transmitters which will allow the recording of their migratory movements over the following months. Students from the Los Angeles High School sponsored one of the turtles, a female measuring 77.5 cm and weighing 50.2 Kg. They named her "Manuelita" and will be following her daily movements on this link.

Researchers recorded 25 sea turtle sightings during the expedition. They were able to capture 11 turtles in all: 10 green turtles and one hawksbill (Eretmochelys imbricata). Five of these turtles had been captured and tagged on previous expeditions, including the one hawksbill. In addition, researchers took tissue samples that will allow them to run genetic tests to determine the origins of these animals, as they do not nest at Cocos Island. Four turtles and 6 hammerhead sharks (Sphyrna lewini) were also tagged with acoustic transmitters as part of a long term, regional monitoring project.

"Preliminary results from this research show that juvenile green and hawksbill turtles use Cocos Island as a residence site," explained PRETOMA researcher Randall Arauz. "Now we need to define the areas of activity for these resident juveniles and the migratory routes the adults take in order to effectively develop management policies," said Arauz.

"Adopting a satellite tagged sea turtle is an excellent environmental education tool," said an enthusiastic Alexia Garro, PRETOMA consultant. We hope these students will continue to support marine conservation efforts throughout their professional lives, and that they serve as a point of inspiration for other schools and companies to join PRETOMA's adoption program."