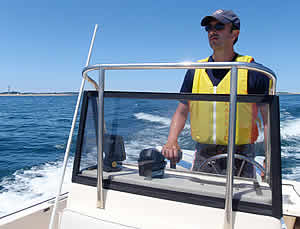 WHOI marine geochemist Matthew A. Charette helped lead the effort to calculate the volume of the Earth's Oceans. (Photo by Bill Charette) 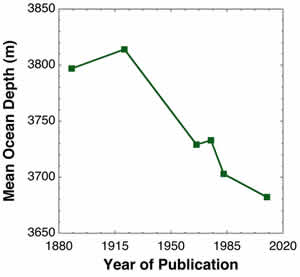 The decrease in ocean volume reflects more precise detection and measurement of undersea mountains (Graph by Matthew A. Charette and Walter Smith)

WOODS HOLE, Massachusetts -- How high is the sky? Scientists have a pretty good handle on that one, what with their knowledge of the troposphere, stratosphere an the other "o-spheres." Now, thanks to new work headed by the Woods Hole Oceanographic Institution (WHOI), they are closing in on the other half of that age-old query: How deep is the ocean?

They're also tackling an even more intriguingâif less romanticâquestion: What is the volume of the Earth's oceans? It's hard to imagine Irving Berlin putting those words into the mouth of a serenading loverâas he did in his classic song, "How Deep is the Ocean?"âlet alone the answer: 1.332 billion cubic kilometers.

But that figure is pure music to the ears of Matthew Charette, an associate scientist in WHOI's Department of Marine Chemistry and Geochemistry who is part of a research effort to audit all the water on the planet. "A lot of water values are taken for granted," he says. "If you want to know the water volume on the planet, you Google it and you get five different numbers, most of them 30- or 40-year-old values."

Using satellite measurements, Charette and co-investigator Walter H.F. Smith, a geophysicist at the National Environmental Satellite, Data and Information Service of the National Oceanic and Atmospheric Administration, have come with up the new ocean volume figure. Their work is published in the current issue of the journal Oceanography.

The researchers report that the world's total ocean volume is less than the most recent estimates by a volume equivalent to about five times the Gulf of Mexico, or 500 times the Great Lakes. While that might seem a lot at first glance, it is only about 0.3% lower than the estimates of 30 years ago.

What may be more interesting, he says, is how accurate scientists were in the past, using cruder techniques to measure ocean depth. As long ago as 1888, for example, John Murray dangled lead weights from a rope off a ship to calculate an ocean volumeâthe product of ocean area and mean ocean depthâjust 1.2% greater than the figure Charette and Smith now report.

Starting in the 1920s, researchers using echosounders improved depth estimates significantly, according to the researchers. Most recently, Smith and others have pioneered the use of satellites to calculate ocean volume.

The trend toward a progressive lowering of volume estimates is not because the world's oceans are losing water. Rather, it reflects a greater ability to locate undersea mountain ranges and other formations, which take up space that would otherwise be occupied by water.

Satellite measurements reveal that ocean bottoms "are bumpier and more mountainous than had been imagined," said Smith. As measurements improve, ocean-volume values are lowering, he notes, emphasizing that this does not reflect an actual lessening of water but a more accurate accounting of undersea formations.

Satellite-based radar cannot "see" the ocean bottom, he explains. Rather, it measures the ocean surface, which reflects what lies beneath. For instance, if a mountain range lurks under a certain part of the ocean, the surface above it will bulge outward. "I take the data set and estimate the location and height of the mountains," Smith says.

The satellite project has covered virtually all the world's oceans, except for some areas of the Arctic that are covered with ice, he says. The result is a "new world map" of the oceans, Smith adds. "Matt and I are seeing a better picture of the shape and volume of oceans."

But satellite measurements have their shortcomings. "There is a problem of spatial resolution, like an out-of-focus camera," says Smith. "We're measuring the sea surface that is affected by mountains," he says, "but we're seeing only really big mountains, and in a blurry way. The resolution is 15 times worse than our maps of Mars and the moon."

Consequently, the researchers say, more ship-based measurements are needed to augment and "fine tune" the satellite data. And so far, ship-based sonar and other instrumentation have mapped only 10% of the Earth's seafloor. "We have gaps in echosounding measurements as wide as New Jersey," says Smith.

It would take a single ship 200 years (or 10 ships 20 years) to measure all the ocean-floor depths with an echsounder, according to published U.S. Navy estimates. "That would come to about $2 billion," Smith says. "NASA is spending more than that on a probe to [the Jupiter moon] Europa."

Charette and Smith are not sure why so little ship-based ocean mapping has been done throughout history. It may be because ocean depth and volume seem to have few direct, practical implications.

However, Charette notes, accurate estimates of ocean depth and volume could tie in with the growing field of ocean observation and exploration as well as, perhaps, climate change models and estimates of salt in the oceans.

And for those of you wonderingâas Berlin put it so eloquently in his musicâif you ever lost your love, how much would you cry? Apparently not as much as you might have 30 years ago. The study's calculation of the ocean's mean depth is 3,682.2 metersâthat's 21-to-51 meters less than previous estimates.