The Secret Of The Sharks' Hunting Success Revealed: It's All In The Scales 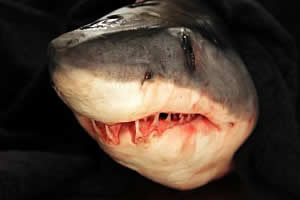 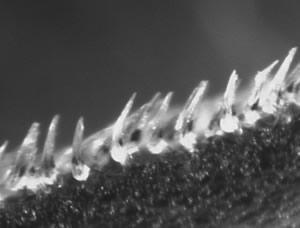 Mako scales from a sample on the side of the shark. Credit: P. Motta/Univ. South Florida

ST. PETERSBURG, Florida -- New research from the University of South Florida suggests that one of the evolutionary secrets of the shark's success hides in one of its tiniest traits -- flexible scales on the bodies of these peerless predators that make them better hunters by allowing them to change directions while moving at full speed.

The key to this ability lies in the fact that the scales control water flow separation across the creatures' bodies, says Amy Lang of the University of Alabama who will present work she performed with her colleagues at the University of South Florida today at the American Physical Society's Division of Fluid Dynamics (DFD) annual meeting in Long Beach, CA.

Flow separation is an issue in systems like aircraft design, explains Lang, because it tends to cause vortices that impede speed and stability.

"In nature, if you look at surfaces of animals, you'll see that they are not smooth," she says. "They have patterns. Why? One common application of patterning a surface is to control flow -- think of the dimples of a golf ball that help the ball fly farther. We believe scales on fast-swimming sharks serve a similar purpose of flow separation control."

Based on experimental measurements and models of shark scales, Dr. Lang's team discovered that the bases of shortfin mako scales (literally small teeth covering their body) where they attach to the skin are not as wide as the tops of the scales. This tapered shape enables the scales to be easily manipulated to angles of 60 degrees or more, endowing them with movement called "denticle bristling."

Also, these flexible scales are only found on parts of the body where flow separation is most likely to occur, such as behind the gills on the side of the body. Denticle bristling is the probable mechanism leading to flow separation control for the shortfin mako shark.