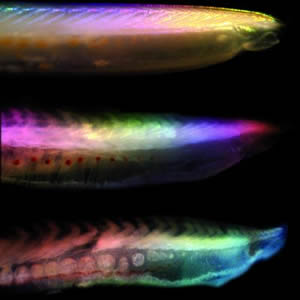 Progressive stages of decay of a close relative of vertebrates. Credit: University of Leicester 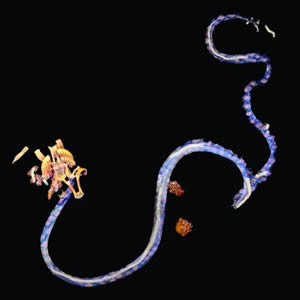 Remains of a hagfish after 20 days of decay. Only the head skeleton, notochord and parts of the liver are left. Credit: University of Leicester

LEICESTER, U.K. -- An innovative experiment at the University of Leicester that involved studying rotting fish has helped to create a clearer picture of what our early ancestors would have looked like.

The scientists wanted to examine the decaying process in order to understand the decomposition of soft-body parts in fish. This in turn will help them reconstruct an image of creatures that existed 500 million years ago.

Their findings have been published today, Wednesday 13th October, in the journal Proceedings of the Royal Society B. The work was funded by the Natural Environment Research Council (NERC).

The researchers, from the Department of Geology at the University of Leicester, studied the way primitive fish, such as hagfishes and lampreys, decompose to gain an impression of our early ancestry.

The team at Leicester (Rob Sansom, Sarah Gabbott and Mark Purnell) explain: "Our earliest fish-like relatives left fossil remains which have the potential to show us how the group to which we belong evolved from worm-like relatives. But there is a major problem â people are familiar with bones, and teeth as fossils but do not perhaps realize that before these inventions our ancestors consisted of entirely soft bodied creatures. Eyes, organs, guts and muscles all decompose very quickly after death, and as any forensic scientist knows recognizing rotted anatomy is difficult.

"Fossils from 500 million years ago provide our only direct evidence of how our earliest vertebrate ancestors evolved from the simple worm-like animals".

The fossils from the early phase of vertebrate evolution are very rare because being completely soft-bodied they normally rotted away completely after death leaving nothing behind. But very occasionally their remains became preserved as fossils giving us a tantalizing glimpse of our early vertebrate relatives.

However, as Rob Sansom explains correctly reading and reconstructing what our ancestors looked like from these semi-rotted remains is tricky. "Interpreting half-a-billion year old fossils is challenging enough in itself, but even more so when the remains comprise only the decayed soft parts which may look quite different to how they would have done in life".

Sarah Gabbott, one of the leaders of the study, admits that at first it may be difficult to see why spending hundreds of hours studying the stinking carcasses of rotting fish helps us to unlock our evolutionary history, but she points out that the results have been critical to correctly reading fossils from this phase in our history. "In a way our experiments are similar to those going on at the infamous 'body farms' in the USA, where human cadavers are left to decompose so that forensic scientists can determine time and cause of death. But, as palaeontologists we want to uncover what an animal which lived 500 million years ago looked like before it died".

"Our macabre experiments are grisly and smelly but they have revealed, for the first time, what characteristic vertebrate features look like when they are partially decomposed".

Rare fossilized fish-like fossils are recognized as being part of our evolutionary history because they possess characteristic anatomical features, such as a tail, eyes and the precursor of a backbone. Mark Purnell, explains further: "our experiments have provided us with a set of photofit-like images allowing us to decipher and correctly identify features in fossils. Our ability to flesh out what our earliest vertebrate ancestors looked like and correctly place them on the Tree of Life is critical to understanding whether our earliest relatives evolved in a burst of complexity or gradually over millions of years"

The results published today in The Proceedings of the Royal Society B, show that some of the characteristic anatomical features of early vertebrate fossils have been badly affected by decomposition, and in some cases may have rotted away completely. Knowing how decomposition affected the fossils means our reconstructions of our earliest ancestors will be more scientifically accurate.