Water Can Used on London Whale Sold on eBay for Â£2,050

No Valid Bids During eBay Auction for Key West Artificial Reef Naming Rights; 'None Were Serious' 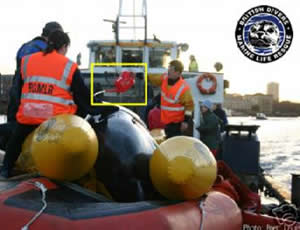 a picture of the red watering can in action

LONDON, England -- The whale's would-be rescuers call it a "symbol of hope," but really it's a small, bright red plastic watering can of the sort usually favored by gardeners.

On Monday, the can - which was used to moisten the skin of a northern bottlenose whale that became stranded in the River Thames and then died - was put up for auction on eBay. All the profits go to the British Divers Marine Life Rescue, the all-volunteer charity organization that attempted the rescue.

"Here's your chance to own a symbol of hope, a piece of history and donate to a worthy cause all at the same time," the site said.

Millions glimpsed the red can as they watched all-news television stations reporting live from the river rescue and it also featured in photos of the operation on newspaper front pages.

The can belongs to Faye Archell, a member of the rescue team. Archell picked it up at a local home-improvement shop and has used it during other marine mammal rescues - mostly of porpoises and seals. This was the first time it had come to the aid of a whale.

"We were splashing the whale, but a watering can is actually much more effective," Archell told The Associated Press.

If the buyer wants, the can could be signed by members of the rescue team, including Paul Jepson, the veterinarian who supervised the operation and who on Monday was performing the post-mortem examination of the whale.

Results of the necropsy were expected Wednesday, and the skeleton will then be donated to the Natural History Museum in London.

The attempted whale rescue was estimated to have cost the volunteer rescue team about $8,800.

It was still not known what caused the 19-foot-long whale to swim up the Thames, far away from the northern bottlenose's usual north Atlantic habitat.