Scotland: Sharkatag 2011 Results Reveal Tope Numbers Down And No Sign Of Cuckoo, Blonde Or Spotted Rays 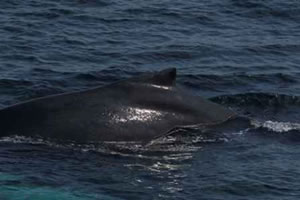 A humpback whale was recently spotted by researchers off the western coast of Scotland. credit L. Drysdale/HWDT

TOBERMORY, Isle of Mull -- The Hebridean Whale and Dolphin Trust’s (HWDT) research vessel Silurian had a very special encounter on the 29th June. The crew were conducting a research survey between South Uist and Coll when one of the volunteers spotted a large, bushy blow in the distance.

As the Silurian approached, and the engines were turned off, and a humpback whale surfaced within a few hundred metres of the vessel to the great delight of all onboard. Relief Science Officer, Sarah Barry, commented “The whale surfaced three or four times in a row and then dived for about five minutes, so it was most likely feeding below the surface, which is an encouraging sign for the area”.

The animal, approximately 10 metres in length, seemed content surfacing alongside Silurian for about an hour and a half. Photographs were taken to of the humpback’s tail flukes, which have a distinctive pattern, and will be compared with other organisations photo-identification catalogues to try and identify the individual.

Humpback whale sightings are rare off the west coast of Scotland but not unheard of. In June of this year, a humpback was spotted off Gairloch and in recent years sightings have numbered one or two a year.

The species is widely distributed in all oceans, making extensive migrations and ranging from their tropical wintering grounds to the edges of the polar ice zones. Unmistakable in appearance, the humpback whale’s pectoral (side) fins are long and narrow (Megaptera means “great wing”) and may measure as much as a third of the body length. When fully grown, humpback whales can measure up to 17 metres and weigh 40,000 kg; the female is normally slightly larger than the male. The tail fluke can measure up to five metres across, has a serrated trailing edge, and is black with distinct patterns of white on the underside; this pattern is unique to each animal and is used for identifying individuals.

HWDT conducts research surveys onboard Silurian throughout the spring, summer and autumn months. Volunteers are welcomed onboard to assist with vital data collection which will be analysed by HWDT scientists to provide a better understanding of cetacean distribution and abundance off the west coast of Scotland.