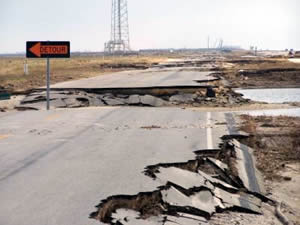 Powerful currents of water from Hurricane Ike eroded sand and rocks under this road causing it to buckle. credit: Lynne Wetmore, Texas A&M

Then he got an unexpected visit from a research assistant named Ike.

"Ike reconfirmed the basic idea I've had for several years," said Feagin, ecosystem scientist with Texas AgriLife Research. "The plants on sand dunes and in marshes build an island's elevation, so we shouldn't compromise that."

Most of the dunes and marshes he and his graduate students had studied were destroyed or severely damaged by Hurricane Ike, which struck Galveston Sept. 13.

But with the 2008 hurricane season officially over, Feagin has noted the changes and will begin again.

His research over the years, however, has yielded discoveries that could help the tender ecosystem recover, depending on human interaction. Among his findings, when comparing before and after Ike, is that the marshes lost elevation, which is contrary to what most would expect to happen in a hurricane.

Damage to Texas's barrier islands stroke a variety of long-debated issues. According to the state's General Land Office, Texas is the only state in the nation that has an Open Beaches Act. That means the public has " free and unrestricted access to and use of the beach" or the area between the dunes and the "state-owned submerged lands," the land office indicates.

The state's coastline is more than 365 miles long. The width is measured from the vegetation line on the land to more than 10 miles into the Gulf of Mexico, according to the land office, which estimates a $7-billion-a-year tourism economy from the area.

Thus, tension brews around mending hurricane-slashed coastal ecosystems from the standpoint of people who choose to live nearby and those who want to enjoy the state's property. Feagin, who admits a passion for coastal ecosystems, said four elements are impacted as a hurricane rolls over a barrier island: beaches erode, sand dunes "blow out," houses and buildings are damaged and, finally, the marshes receive sediment deposits from all the above.

"With beaches, sand from the beach is washed out into the sea, and it usually comes back in the natural wave cycles over time," he said. "But along the Texas coast, our sand doesn't come back very well. That's because it is very silty and so is carried farther away in the Gulf." He said the state's coastline also has a lot of development and engineered structures such as jetties which are meant to stabilize the land but instead interrupt the natural sedimentary process.

"The coast is one of the most dynamic ecosystems there is, and it can totally change in a hurricane," Feagin said.

In some areas, he said, there was only a thin sand veneer on top of clay. With that sand now gone, all of the invertebrate animals are gone because they are not able to live in the clay.

That will impact other animals in the food chain, such as birds that previously fed on the small creatures.

"The dunes are a little higher than the beach and some do OK," he said. "But basically water is forced through existing holes in dunes causing them blow out. Our dunes have problems because of over development, so that could make it difficult for sand dunes to re-establish."

Feagin said the sand dunes in the area hit by Hurricane Ike were already eroding at a rate of several feet per year. The natural mending of washed-out beaches might not be possible because of the many structures and non-native landscapes maintained there, blocking dune re-establishment.

He explained that sand dunes need plants to accumulate sand from passing winds. Many of these plants are actually stimulated to grow as they become buried by sand, resulting in the deposit of another layer of sand until a larger, land-sustaining dune is "born." But if a lawn is maintained where a dune used to be, the layers will never be allowed to rebuild and thus no dune will exist to provide some measure of protection in the future.

"Dunes can protect buildings to some degree in the smaller storms that are more common in the area," Feagin said. "Plus the location of vegetation and dunes in Texas is where many legal battles play out for public versus private property issues.

"We care about dunes because we want our public beaches," he added. "And if a private house has been built and there is now no dune in front of it, then that house is now on our public land and may block our access to this extremely valuable tourism resource. "

Beyond these legal issues, he added, the dunes also support animals such as Kemp's Ridley sea turtles, which are endangered.

The sea turtles' nesting season in Texas runs from April through mid-July but nesting peaks during May and June. Females typically nest at the base of dunes or within the dune complex, according to Dr. AndrÃ© Landry, AgriLife Research marine ecologist and director of the Sea Turtle and Fisheries Ecology Research Laboratory at Texas A&M University at Galveston.

One of Feagin's dune projects - planting of sea oats at Galveston State Park - was totally decimated by Ike. Sea oats, which used to be prevalent on the island, had been eliminated first from overstocking of cattle decades ago and then from building and infrastructure construction, said Feagin.

In the next element of the island, certainly many homes and buildings were damaged, and plants there look "toasted" by salt water, he said.

But the final section – the salt marshes – had measurable damage, as Feagin's ecosystem research shows.

"A salt marsh is normally a fairly nice protected area that benefits from a hurricane because all that sediment gets blown out from the beach, dunes and upland is deposited in the marsh," Feagin said. "But our research on the backside of Galveston where the surge was around 12 feet shows it lost elevation. The marshes need to maintain a fairly shallow water depth to support their unique ecosystem. And sea levels have been rising, so sediment is needed to maintain the depth.

"The sediment accumulation didn't happen. In fact, at our research site, elevation dropped at about same rate as under everyday conditions."

Feagin believes this could be because all the development between Gulf side and marsh side kept the sediment from arriving.

"There was not any sediment addition in the salt marsh, which is not good," he said, noting that a lack of rain since Ike and the influx of a higher concentration of salt water means that many of the marshes are parched. "Marshes are among the most productive ecosystems in the world. They are full of organic materials, detritus algae and plants. Gulf crab, shrimp, and commercial fish all have some portion of their life in marshes. So if we lose marshes, we lose fisheries.

"Bird watching and hunting are also huge economically," he noted, "and marshes also filter runoff from the mainland to provide cleaner water to the bays."

Feagin said the marshes also play a role in building new land because the plants slow down rising tide water, causing suspended sediment to settle, resulting in layers of land over time.

"Prior to Ike, we tested this near Galveston by killing the marsh plants in one area to compare surface elevation change with a nearby marsh where we left the plants alone," he said. "We found that the plants did help build land elevation prior to the hurricane."

However, when studying post-Ike surface erosion at the site, Feagin said, "we found the plants did not prevent sediment erosion by waves during Ike and in fact enhanced erosion because their roots wiggled, stirring up sediment to be washed out to sea.

"Some would say that plants directly protect the land and thus protect people from storms," Feagin said. "But that's not so in terms of the big storms. But the waves are not what does the damage and cause death, it's the water depth. If you get a 12-foot wall of water, it doesn't matter if you have a front yard full of oak trees.

"We need to rely on 'ecological engineering' and good policy that requires people to build homes in the correct locations," he said. "If we covered a barrier island such as Galveston with concrete, you could say it was stabilized. But without the natural process of building elevation through by plants, the whole thing will eventually drown from the rising sea level."