One of the oceanâs most formidable marine predators, the mosasaur Platecarpus. Illustration by Stephanie Abramowciz, NHM Dinosaur Institute 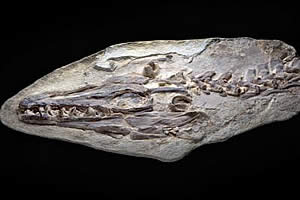 LOS ANGELES, California -- One of the ocean's most formidable marine predators, the marine mosasaur Platecarpus, lived in the Cretaceous Period some 85 million years ago and was thought to have swum like an eel. That theory is debunked in a new paper published today in the journal PLoS ONE. An international team of scientists have reconceived the animal's morphology, or body plan, based on a spectacular specimen housed at the Natural History Museum of Los Angeles County.

The mosasaur specimen was discovered in Kansas in 1969, and acquired by the NHM shortly thereafter. It contains four slabs, which make up a virtually complete, 20-foot specimen. Dr. Chiappe spurred a modern preparation of the specimen, and assembled the paper's research team. "It is one of several exceptional fossils that will be featured in Dinosaur Mysteries," said Chiappe, curator of the 15,000-square foot landmark exhibition that opens at the museum in 2011.

In the meantime, the fossil will be temporarily on display at the museum's Dino Lab, a working lab located on the second floor of the museum, where paleontologists prepare fossils in full view of the public.

Using it, the scientists demonstrate that a streamlined body plan and crescent-shaped tail fin were already well established in Platecarpus, and that these key features evolved very early in the evolution of mosasaurs. Noting the highly specialized tail fin, the new study assert that mosasaurs were better swimmers than previously thought â and that they swam more like sharks than eels.

The findings underscore how these adaptations for fully aquatic existence evolved rapidly and convergently in several groups of Mesozoic marine reptiles, as well as in extant whales. "This fossil shows evolution in action, how a successful design was developed time after time by different groups of organisms adapting to life in similar environments," said Chiappe. "It highlights once again the potential for new discoveries to challenge well-established interpretations about dinosaurs and other animals that lived with them."

"From this beautifully preserved specimen it seems that advanced, shark like swimming began in mosasaurs millions of years earlier than we previously thought," said Dr. Kevin Padian, a paleontologist at the University of California, Berkeley, not involved in the paper. "This study is the best possible proof that active research by curators and staff is the most essential component of a museum dedicated to educating the public."