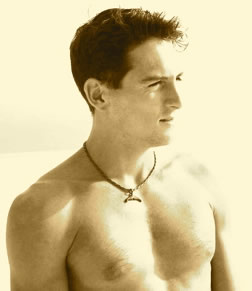 MIAMI, Florida -- In mid-December William Trubridge will make an attempt at the freediving world record and the monumental depth of 100 meters (328 feet).

Freediving is the sport of breath-hold diving, and the unassisted category is the most refined and challenging form of the sport: the freediver may use only their bare hands and feet he will swim down into the abyss and back up to the surface. The discipline is referred to as the purest measure of human aquatic potential.

The dive will take place at Dean's Blue Hole, on Long Island, in the Bahamas, the deepest blue hole in the world, at 203 meters (660 feet). The record attempt is being billed as 'Project Hector,' since 100 meters is equal to one hectometer - the height of a 30-story building. The current world record, also held by Trubridge, is 95 meters, set earlier this year at the annual Vertical Blue invitational competition in the same location.

For this attempt, Trubridge is giving viewers and supporters the opportunity to own a piece of the dive, by buying or bidding on one of the 100 individual meters. The supporter's names will be displayed in a scrolling list next to the depth during the official video of the dive. They will also receive the actual meter of the glow-in-the-dark descent line used for the record dive, mounted in a spiral on a commemorative plaque, as well as a DVD of the dive, and an official team shirt.

Both www.verticalblue.net and the Vertical Blue Facebook site have all the details on how to own a piece of the dive, as well as regular updates in the build-up to the attempt.

When he was an infant, Trubridge's family sold their house in England to buy a boat and sail from Spain across the Atlantic, Caribbean and Pacific Ocean to New Zealand. Like Hawaiian children, he learnt to swim and walk at the same time, and by the age of 8 was already freediving to 15 meters, competing with his older brother to see who could bring back a stone from the deepest depth. However he didn't discover freediving was a sport until eight years ago, when he was 22, and traveled back to the Caribbean, where he became hooked on the sport, spending hours every day descending the huge coral walls or lying in sunny sand gardens watching the tropical fish.

He now trains 5 to 7 hours a day, and uses yogic breathing exercises and mind control techniques in order to deal with being so deep under the sea, with nothing to depend on other than his own hands and feet.

At 100 meters the pressure exerted by overhead water crushes Trubridge's lungs to the size of small grapefruit, and the blood vessels inside them swell with blood in order to stop the lungs from imploding. The heart slows to 25 beats per minute, and Trubridge has to fight the narcotic effects of pressurized carbon dioxide and nitrogen - the so-called 'rapture of the deep' that tempts him towards a fateful sleep. Using yoga and techniques such as visualization and mental programming Trubridge is able to keep his body going even when the mind is 'not completely there.' This depth is more than three times the depth limit for recreational scuba diving, and it would be considered suicidal to go this deep breathing from a normal scuba tank of air. The dive is expected to last four minutes in total, but since the muscles are using precious oxygen in order to propel the body up and down it is far more difficult than a straight breath hold for even twice that amount of time.

Trubridge uses a silicon-coated wetsuit specifically designed by Orca, as well as swimming goggles that have been adapted with corrective lenses mounted on the inside so that they can be flooded and enable vision underwater. The record depth is verified by an official Suunto D4 depth gauge that Trubridge wears on his wrist, as well as underwater cameras that are viewed by judges from AIDA - the official organization for verifying freediving records.

Safety technical divers using rebreathers will be stationed along the vertical descent line that William will follow, without touching, to the bottom and back.

William Trubridge and his wife Brittany spend seven months of the year training in the Bahamas, and the rest of the time traveling through Europe teaching freediving and yoga courses. They were the hosts of the recent AIDA World Championships, where William won gold and bronze in the disciplines with and without fins.

Compared to scuba, Freediving offers a greater interaction with the liquid element. Fish aren't scared off by noisy bubbles, and speed and maneuverability make it possible to swim with sharks, eagle rays and dolphins, or explore tight caves. The tiny noises, sights and sensations of the underwater experience are hindered by scuba diving, but more importantly a freediver feels absolutely integrated with their environment.